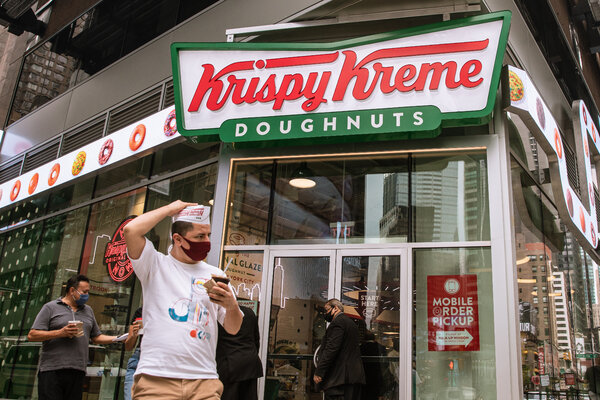 Krispy Kreme, the doughnut giant owned by the European investment firm JAB Holding, is planning to sell stock to the public.

The company revealed its financials for the first time on Tuesday as it prepares for a public listing in the United States. The company’s sales grew 17 percent to $1.1 billion its last fiscal year, up from $959,000 the year before. Losses, though, nearly doubled, to $60 million from $34 million as the company doubled down on efforts to transform itself. That includes the $20 million it spent on consulting and advisory fees, personnel transition costs, buying out its franchisees and other initiatives.

JAB acquired Krispy Kreme for roughly $1.35 billion in 2016, adding the doughnut seller to a portfolio of consumer brands that now includes the sandwich shop Panera and the coffee chain JDE Peets.

The firm has since taken JDE Peets public and is laying the groundwork to do the same with Panera. The I.P.O. market has been wide open for consumer brands like Oatly, the dairy-free milk producer, and Honest Company, the online consumer products retailer. Digital brands like Warby Parker, the eyeglass store, and AllBirds, the Silicon Valley shoe favorite, are also considering offerings.

But unlike many of those brands, Krispy Kreme is no start-up. The 83-year old company first went public in 2000 before its sale to JAB. It must contend with new health trends, as well as a dining backdrop that has transformed considerably over the past year, as restaurant giants poured money into technology to adapt to the remote needs of customers. Among the leaders was Dunkin’ Brands, which was acquired by Inspire Brands, the parent of Arby’s, for $11 billion last year.

Krispy Kreme says it is not a restaurant but “an affordable indulgence.” The brand said in its I.P.O. prospectus its doughnuts are “world-renowned for their freshness, taste and quality,” and it highlighted its ability to create “major media-driven events,” like its doughnut giveaway to promote coronavirus vaccinations.

Shares will trade on the Nasdaq stock exchange under the symbol DNUT.

Opinion | The E.U. Puts Its Foot Down on the Rule of Law