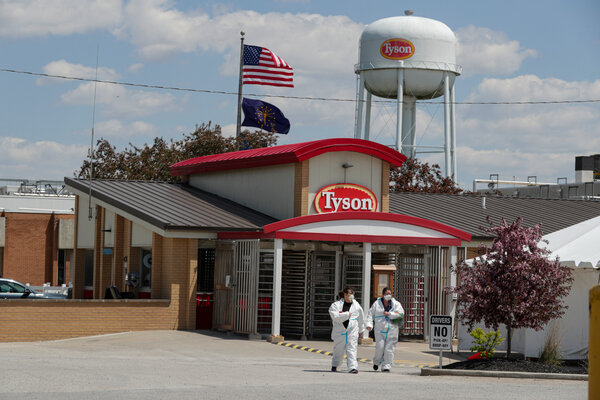 On Aug. 3, Tyson Foods announced it would require coronavirus vaccines for all 120,000 of its employees in the U.S. The move was notable because it included the meat-processing firm’s frontline workers at a time when corporate mandates mostly applied only to office workers. DealBook spoke with Dr. Claudia Coplein, Tyson’s chief medical officer, about the results of its decision nearly two months later.

91 percent of Tyson’s U.S. work force is now fully vaccinated. When it announced the mandate “as a condition of employment,” less than half of its work force was inoculated. Tyson did not release vaccination by type of worker, but “certainly the vaccination rate amongst our frontline workers was lower than our office-based workers at the beginning of this,” Dr. Coplein said.

The United Food and Commercial Workers union, endorsed the mandate in return for more benefits, like paid sick leave. Frontline workers have until Nov. 1 to get vaccinated (or request an exemption), while the company’s roughly 6,000 office workers have until Oct. 1 to do so. Similar to the company overall, Tyson said that about 91 percent of its 31,000 unionized employees are now vaccinated. Unlike some other big companies, Tyson has not faced any lawsuits over its mandate.

A poultry plant went to 100 percent vaccinated from 78 percent vaccinated after Covid hit close to home. A viral video about Caleb Reeves, a young Arkansas man who died of Covid, helped to highlight the risk of the virus to young people, “and we have many young frontline workers,” Dr. Coplein said. Reeves’s uncle worked at a Tyson plant, and the video “gave them a personal connection to say, ‘Hey, that could be my family, too,’” Dr. Coplein said.

Tyson executives have visited plants to have small group conversations about the vaccines. Some questions Dr. Coplein regularly hears are whether vaccination will affect fertility or pregnancy (the evidence suggests not). “The most powerful conversations have been when I sat down with somebody who was scared or emotional or otherwise hesitant to get the vaccine,” she said, “and they just really needed somebody to listen to them with empathy.”

Fortune 500 companies and the White House’s Covid task force have reached out to discuss Tyson’s experience, particularly after the White House asked OSHA to order large employers to make vaccination mandatory. (Tyson has lost a handful of employees over its mandate, though that number may increase as the deadline nears.) Tyson expects that when OSHA outlines more details and a timeline for mandates, which could take weeks, more companies will announce vaccine requirements. When that happens, the options will be limited for those who quit (or are let go) because of a mandate.

AT&T is extending its vaccine mandate to tens of thousands of unionized employees.

NBA players won’t be paid if they miss games because they can’t provide proof of vaccination in stadiums that require it.

Lawmakers scramble to avert a shutdown. Democrats are preparing legislation to avert a government shutdown at midnight tonight, perhaps by unlinking it from a measure to raise the debt ceiling. The fate of a $1 trillion bipartisan infrastructure bill that was scheduled for a vote today remains unclear.

Facebook releases internal reports on the eve of congressional hearings. The two reports, both from 2019, provide more evidence that Facebook was aware of the effect of Instagram on young users’ mental health. The company annotated the reports to highlight limitations of the research. A Facebook executive will testify today at a Senate subcommittee hearing on “Protecting Kids Online.”

Citigroup presses judges to “rewind” a mistaken $504 million payment. In an appeals proceeding yesterday, Citi’s lawyer argued that the accidental early repayment of a loan for Revlon should have raised red flags among creditors, some of whom refused to return the funds (and won a judgment against Citi in an earlier case).

Macy’s is suing over an Amazon billboard. The department store hopes to block the e-commerce giant from advertising on a 2,200-square-foot display next door to its flagship store in Manhattan. Its lawsuit against the billboard’s owner said that the negative impact of allowing a “direct competitor” to take the spot would be “immeasurable.”

Mary Barra is the new chair of the Business Roundtable. The General Motors chief will be the first woman to lead the influential lobbying group, which represents chief executives of major U.S. companies. She will succeed Doug McMillon, Walmart’s C.E.O.

Everybody is talking about inflation

Prices have recently been rising faster than expected. A related phenomenon — executives mentioning “inflation” on calls with investors — has also been running hot.

Mentions of “inflation” on earnings calls are at their highest in more than a decade. FactSet said the term came up more than 220 times in second-quarter earnings calls at S&P 500 companies. The previous record was one quarter earlier, showing that the surge in prices isn’t a passing preoccupation.

This doesn’t appear to be a big problem for profits — yet. A few companies have recently trimmed their forecasts because inflation was eating into their margins, but earnings expectations on the whole for S&P 500 firms are higher today than they were in June, according to FactSet.

Sherwin-Williams cut its sales and earnings forecast this week, citing rising prices and shortages of raw materials. “We are increasing our full-year raw material inflation outlook to be up a high-teens percentage compared to last year,” John Morikis, the company’s C.E.O., told analysts.

FedEx trimmed its full-year profit guidance last week, in part because of the “higher operating costs we are incurring,” said Mike Lenz, the company’s C.F.O. FedEx is raising many of its shipping rates by nearly 6 percent starting next year.

At General Mills, “ideally you’d not like to go back to retailers multiple times or consumers with price increases, but we’re clearly not in an ideal market,” said Jeff Harmening, the company’s C.E.O., adding, “People understand the need to revise plans.”

In the next few weeks, companies will start to report third-quarter results. Central bankers have said that supply disruptions could prolong a period of high inflation, so it’s a safe bet that the “i” word will remain a popular discussion topic.

In other inflation news, the discount retailer Dollar Tree said it would start selling more products above $1.

“The allegations in The New York Times, which caught me by surprise, are serious and deeply troubling, and I had no choice but to end my relationship with the company.”

— Katty Kay, a former BBC anchor who had recently joined Ozy Media, in a statement announcing her resignation. The digital media company is under pressure on multiple fronts after The Times reported that an Ozy co-founder had apparently impersonated a YouTube executive on a conference call with Goldman Sachs. Ron Conway’s seed fund, SV Angel, said this week that it was giving up the shares it acquired in the company in 2012.

Peering down the pipeline

The work of financial regulation may not seem personal, yet it determines who has access to economic opportunities. The fact that there have been very few Black economic policymakers appointed to top positions suggests to Chris Brummer of Georgetown Law that rules will continue to be devised without everyone’s interests in mind. The pipelines that lead to these jobs are also wanting.

“No one likes to go through these numbers,” Brummer said, “but the numbers tell a story. Not a very flattering one.” Last year, in a study of Black appointees at federal financial agencies, he found that only 10 of the 327 people appointed to regulatory positions were Black. To him, this suggested that a dearth of Black congressional staff members in early-career positions could help explain the lack of diversity at financial agencies.

The Biden administration has turned to universities for top nominees. So Brummer gathered data on corporate law professors at five top law schools — experts in antitrust, bankruptcy, corporations, securities and tax — and said the numbers were worse than he expected. Among his findings, at the top five schools — Columbia, Harvard, Stanford, Yale and the University of Chicago — 67 of 71 corporate law professors are white and four are Asian, while 62 of 71 are men.

If these numbers don’t improve, economic policy will fail the underrepresented because policymakers lack important perspectives, he told DealBook: “Rules are designed with assumptions made about the people they are intended to protect and support.”

Speaking of academia … amid the uncertainty created by the pandemic, business school professors are trying to prepare aspiring corporate leaders for a future that challenges the conventional wisdom about management and the very purpose of companies.

The Aspen Institute’s latest Ideas Worth Teaching awards named eight “especially bold” courses that pushed the “boundaries of what was previously thought possible,” the institute’s Jaime Bettcher told DealBook. These professors are “leveraging the moment” to chart a new path, she said, by integrating environmental, social and governance issues into more traditional B-school fare.

Click the links to see the syllabus and video clips of the winning courses:

Beyond Diversity: The Fundamentals of Inclusive Leadership, Nicholas Pearce, Kellogg School of Management

Grand Challenges for Entrepreneurs, Emily Cox Pahnke, Foster School of Business at the University of Washington

Relationships and Reconciliation in Business and Beyond, Lindsay Brant and Kate Rowbotham, Smith School of Business at Queen’s University

The History and Ethics of Capitalism, James Hoopes, Babson College

The investor Chamath Palihapitiya, a Tesla bull, sold all of his stock in the electric vehicle company to invest in other projects. (CNBC)

Global M.&A. in the third quarter, at more than $1.5 trillion, is set to break records. (Reuters)

Proposed regulation from the S.E.C. would require hedge funds and other investment firms to disclose how they voted on executive pay. (Insider)

The F.A.A. completed its investigation of Virgin Galactic’s space flight in July, accepting the company’s proposals to change how it operates its missions. (WSJ)

Best of the rest

What’s behind the critical shortage of truck drivers in Britain. (NYT)

Amazon settled with two former employees who said they were fired for speaking out about the company’s environmental impact and working conditions. (NYT)

“The Pandemic Made the Finance Industry’s Toughest Test Tougher.” (NYT)

We’d like your feedback! Please email thoughts and suggestions to dealbook@nytimes.com.

Turkey extends closure of schools to end-May over coronavirus: minister