Two senior leaders of Fox News’s reporting division are exiting the network as the cable channel replaces some news programming with right-wing opinion shows and tries to lure back viewers who balked at its coverage of the 2020 election and its aftermath.

On Tuesday morning, Fox News fired Chris Stirewalt, the veteran politics editor who was an onscreen face of the network’s election night projection that Joseph R. Biden Jr. had defeated President Trump in Arizona, according to three people with knowledge of the matter.

Fox News was the first news outlet to call Arizona for Mr. Biden, a move that infuriated many of its regular viewers — including Mr. Trump, who denounced the network as insufficiently loyal and urged fans to watch Newsmax and One America News instead.

On Monday, Bill Sammon, Fox News’s longtime Washington bureau chief, told staff members that he would retire at the end of January. Three people with knowledge of internal discussions said that Mr. Sammon, who had editorial oversight of the network’s Decision Desk, had faced criticism from network executives over his handling of election coverage, despite the Arizona call ultimately being accurate.

Fox News declined to comment on the departures; Mr. Sammon’s retirement was previously reported by The Hill. In addition to their exits, roughly 20 Fox News digital journalists were laid off on Tuesday. The network attributed the layoffs in a statement to a realignment of “business and reporting structure to meet the demands of this new era.”

Executives at Fox News — the profit center of Rupert Murdoch’s American media empire — have been concerned by a postelection drop in ratings, a slump that has persisted for two months as upstart rivals like Newsmax gained viewers by featuring fringier fare that embraced Mr. Trump’s baseless theories about electoral fraud.

Prominent conservative pundits at Fox News who supported Mr. Trump, like Tucker Carlson and Sean Hannity, remain popular and are tied to the network under long-term contracts.

Fox’s corporate leadership has been scrutinizing the news division, which is led by Jay Wallace, the president and executive editor of Fox News Media, according to a person with knowledge of internal discussions. Fox News’s daytime news programs, which often feature conservative guests but are helmed by anchors who do not report to the network’s opinion side, have experienced a sharp loss in viewership.

Mr. Stirewalt appeared on Fox News several times on election night and the days afterward. He vigorously defended the network’s early call of Arizona, even as anchors like Martha MacCallum grilled him about the decision; other TV networks did not call Arizona for Mr. Biden until days later. On Nov. 4, asked on-air about the Trump campaign’s baseless claims of fraud, Mr. Stirewalt memorably replied, “Lawsuits, schmawsuits. We haven’t seen any evidence yet that there’s anything wrong.”

Mr. Stirewalt’s analysis bore out: Mr. Trump did not win Arizona and his team produced no credible findings of fraud. But Mr. Stirewalt’s defense of the Arizona call drew condemnation from Trump fans, and he soon disappeared from the network’s coverage; his last on-air appearance at Fox News was Nov. 16. (Mr. Stirewalt continued to co-host a Fox News politics podcast with the anchor Dana Perino, an episode of which was published on Sunday.) 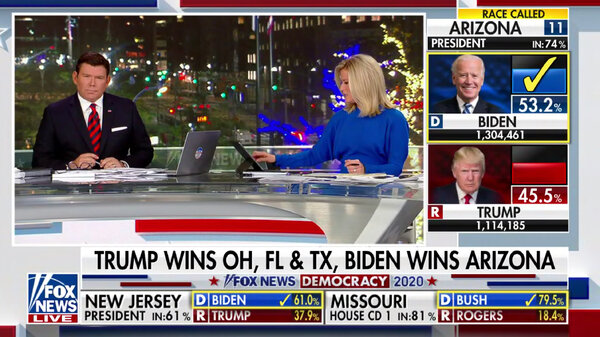 Executives at Fox News believe Mr. Stirewalt’s appearances turned off viewers who were dismayed to see Fox News, like every other mainstream media outlet, eventually declare Mr. Biden the president-elect on Nov. 7, said three people with knowledge of the network’s inner workings.

On Monday, Fox News moved Ms. MacCallum, one of its lead news anchors, out of the early evening and into the less desirable 3 p.m. time slot. Ms. MacCallum’s previous 7 p.m. hour has shifted to an opinion-focused program with an anchor to be announced; Brian Kilmeade of the morning show “Fox & Friends” is temporarily in the role.

One contender for the 7 p.m. slot is Maria Bartiromo, the veteran business journalist who is a prominent face of Fox Business and has been a loyal on-air ally to Mr. Trump. On her Tuesday show on Fox Business, Ms. Bartiromo stated that left-wing protesters had impersonated Trump supporters during the riot at the United States Capitol — a claim that has been thoroughly debunked.

The network is also considering a late-night slot for the conservative pundit Greg Gutfeld, a co-host of “The Five” who also helms a popular Saturday night talk show for the network, according to two people familiar with the discussions.