LONDON — The initial public offering for Deliveroo, the Amazon-backed food delivery service, is set to be Britain’s biggest this year, giving the company an initial market value of 7.6 billion pounds, or $10.4 billion. But the listing, whose announcement was quickly heralded as a post-Brexit victory for London’s financial sector, has since been rocked by accusations of poor pay for Deliveroo riders.

Major investors, meanwhile, said they would sit out the offering.

Trading is set to begin on Wednesday, with shares priced at £3.90 a share, the bottom of the target range that originally was as high as £4.60. Earlier this week the company said that it wanted to price the shares “responsibly” and that it had received “very significant demand” from investors.

Deliveroo, which is based in London and was founded in 2013, is now in 12 countries and has over 100,000 riders, recognizable on the streets by their teal jackets and food bags. Last year, Amazon became its biggest shareholder with a 16 percent stake, which will drop to 11.5 percent after the I.P.O. The Deliveroo listing is the latest test for gig economy companies, whose business model is increasingly under threat in Europe as legal challenges mount.

Two weeks ago, Uber reclassified more than 70,000 drivers in Britain as workers who will receive a minimum wage, vacation pay and access to a pension plan, after a Supreme Court ruling. Analysts said the move could set a precedent for other companies and increase costs. In mainland Europe, where Deliveroo also operates, the European Commission is reviewing the legal status of gig economy workers.

Demand for Deliveroo’s services could soon diminish, as well, as Britain begins to ease pandemic restrictions, including a reopening of restaurants in less than a month. Last year, Deliveroo said, it lost £226.4 million even as its revenue jumped more than 50 percent to nearly £1.2 billion.

The valuation is “very lofty for a company that hasn’t made a profit,” said Susannah Streeter, an analyst at Hargreaves Lansdown. In addition to its financial losses, stiff competition from other food delivery companies and a potential drop in demand as lockdowns end, “you’ve got this issue that is not going away about the working conditions of its riders,” Ms. Streeter said.

Last week, a joint investigation by the Independent Workers’ Union of Great Britain and the Bureau of Investigative Journalism was published based on invoices of hundreds of Deliveroo riders. It found that a third of the riders made less than £8.72 an hour, the national minimum wage for people over 25.

Deliveroo dismissed the report, calling the union a “fringe organization” that didn’t represent a significant number of Deliveroo riders. The company said that riders were paid for each delivery and earn “£13 per hour on average at our busiest times.” In Britain, Deliveroo has 50,000 riders.

“Our way of working is designed around what riders tell us matters to them most — flexibility,” Deliveroo said in response to the investigation.

Alex Marshall, the president of the union, said that Deliveroo was using flexibility as a way to “strip workers of rights that you’d assume were in any kind of employment relationship.”

“We love flexibility too,” Mr. Marshall said. “Flexible working is great and it’s something as a union we champion.”

Mr. Marshall said the union was not asking Deliveroo to make its riders employees but to give them more rights, including holiday pay, access to pension plans, and ensure riders earn the national minimum wage after costs. 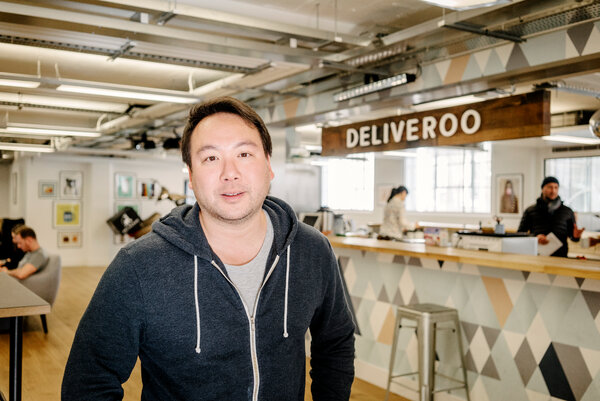 Deliveroo will start trading shares on Wednesday in a period called conditional dealing, when the stock can change hands only among investors allocated shares in the initial offering. The stock is expected to be fully listed on the London Stock Exchange next Wednesday and can be traded without restrictions from then.

The independent labor union said it was working with Deliveroo riders to plan strikes across Britain on April 7.

Deliveroo pointed to recent public offerings to explain why its pricing was at the lower end of the target range. For example, Trustpilot, an online reviews platform, went public a week ago and its first few days of trading have been quite volatile.

But there are broader signs of waning investor appetite for food delivery companies. Shares in Just Eat Takeaway.com, the Dutch-British company, have dropped 20 percent this year as the vaccine rollout has gathered pace and economies look set to fully reopen later in the year. DoorDash, the American food delivery company, went public in December to much fanfare. Its share price jumped 86 percent on the first day of trading, closing at $189.51. On Monday, DoorDash stock closed at $129.98.

Some of Britain’s largest asset managers, including Legal & General Investment Management, which manages more than £1.2 trillion in assets, have said they will sit out the I.P.O. amid concerns about shareholder voting rights and worker rights. Like many start-up companies, Deliveroo will have two classes of shares, which for as long as three years will give William Shu, a co-founder and the chief executive, 57 percent of the voting rights.

The offering has prompted a debate over whether companies with dual-class shares should be allowed to join the “premium listings” section of the London Stock Exchange, which would permit them to be part of indexes like the FTSE 100, forcing many index funds to buy them.

While the New York Stock Exchange and other major exchanges allow this kind of privilege to dual-class companies (consider Google or Facebook), the London exchange does not — although some would like it to.

Legal & General said it was urging Britain’s financial regulator to preserve the rule keeping dual-class companies out of the premium listings.

This would protect smaller investors “against potential poor management behavior, that could lead to value destruction and avoidable investor loss,” the asset manager said. This year has also brought “increasing signs of countries and governments reviewing the gig economy status.”

But a recent review of Britain’s listings rules that has been embraced by the government recommended that companies with dual-class shares be allowed into the premium listings, with some restrictions. The review is part of a series of efforts by the Treasury to find ways to enhance London’s appeal as a global financial center, after Britain’s divorce from the European Union sent some trading activity to cities like New York and Amsterdam. One of the Treasury’s goals is to make the London stock market more appealing to tech companies after a dearth of major listings in recent years.

After Deliveroo announced London as its choice for the I.P.O., the chancellor of the Exchequer, Rishi Sunak, said that it was a “fantastic” decision and that Deliveroo was a “true British tech success story.”

“The U.K. is one of the best places in the world to start, grow and list a business — and we’re determined to build on this reputation now we’ve left the E.U.,” Mr. Sunak said.

Biden will seek new COVID-19 relief package next year, 'darkest days' are ahead

Man filmed stepdaughter, 14, naked in bathroom to ‘make fun of her with friend’