Europe’s strategy, Nagorno-Karabakh, I.M.F.: Here’s what you need to know.

We’re covering European attempts to control a virus surge, how climate change and fire devastated the rich Pantanal wetland in Brazil and one Japanese tourist’s long journey to Machu Picchu. 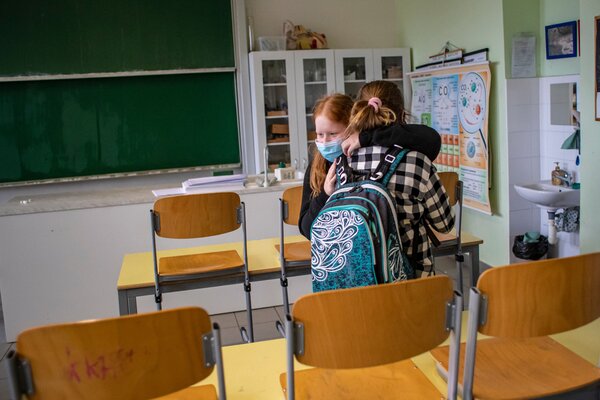 Leaders across the continent are imposing restrictions to hold at bay a fast-growing wave of new coronavirus cases. They also want to avoid a return to the sweeping lockdowns that devastated economies in the spring.

A pointed warning came from Chancellor Angela Merkel of Germany, who said that she was worried about cases “in almost every part of Europe,” Reuters reported. “We mustn’t throw away what we achieved via restrictions over the past months,” she said at a meeting with E.U. officials on Tuesday.

Details: The European Union is trying to unify procedures for quarantines and testing between countries in the bloc. The Czech Republic has announced it will close schools and theaters, and it has restricted restaurants to offering only takeout orders. Neighboring Slovakia is closing high schools and is considering restricting travel to the Czech Republic. In Italy, parties have been banned and indoor gatherings are limited to six people.

Here are the latest updates and maps.

Prime Minister Boris Johnson of Britain has brushed aside advice from an influential group of scientists to lock down the economy for a brief period to try to halt a surge in new cases.

Johnson & Johnson has paused the large late-stage clinical trial of its coronavirus vaccine because of an “unexplained illness” in one of the volunteers, the company said on Monday. Separately, Eli Lilly paused an antibody trial over a “potential safety concern.”

Cristiano Ronaldo, one of soccer’s biggest stars, has tested positive for the virus.

Here are some of the notable moments from the day:

Judge Barrett pushed back on Democrats’ portrayal of her as a right-wing activist chosen to undermine certain issues: “Judges cannot just wake up one day and say, ‘I have an agenda — I like guns, I hate guns, I like abortion, I hate abortion,’ and walk in like a royal queen and impose their will on the world.”

She refused to say whether she would recuse herself, if confirmed to the Supreme Court, from considering an upcoming case in which Republican states are trying to get the court to strike down the Affordable Care Act — or from any case that may arise from a legal dispute over the presidential election next month.

She invoked her predecessors and refused to say how she would rule in potential cases on abortion, the election and same-sex marriage. Quoting Justice Ruth Bader Ginsburg, she said: “no hints, no forecasts, no previews.”

Though she pushed back on descriptions of her as a “female Scalia,” referring to her mentor and the former Supreme Court Justice Antonin Scalia, they share a similar school of thought. She is a strict textualist who interprets the “Constitution as a law.”

War in the Caucasus, where coexistence is ‘impossible’

The new war in Nagorno-Karabakh is a continuation of more than a century of on-off strife. The days of the Soviet Union, when Azerbaijanis and Armenians lived together in peace, feel like a lost world.

In both Azerbaijan and Armenia, views of the other as the enemy have hardened as a generation has come of age with no memory of living with each other on friendly terms. Our correspondent visited villages in Armenia where the conflict has left unhealed scars.

Quotable: “To live together is, put simply, impossible,” said Shahen Babayants, the village head of Shgharjik, in Armenia.

The latest: The conflict has the potential to spiral into a bigger crisis with sprawling consequences. It is already drawing in Turkey, Azerbaijan’s ally and a NATO member; Russia, which has a defense treaty with Armenia; and Iran, which borders to the south.

If you have 8 minutes, this is worth it

From tropical wetland to inferno

Roughly a quarter of the Pantanal wetland in Brazil, one of the most biodiverse places on Earth, has burned this year in wildfires worsened by climate change. It is home to breathtaking wildlife: jaguars, tapirs, endangered giant otters and bright blue hyacinth macaws. Its swamps and lagoons purify water and store carbon.

Our climate reporters mapped the devastation from the unprecedented fires this year and talked to people living in communities where the water, air and food supplies have been affected. “I couldn’t help but think: Our Pantanal is dead,” said Eunice Morais de Amorim, a member of the Guató people, an Indigenous group.

Machu Picchu: Jesse Katayama, a Japanese tourist, didn’t let Peru’s lockdown to curb the coronavirus keep him from completing the journey of a lifetime. After a seven-month wait, he was granted special permission to be the first to visit the sprawling Inca citadel high in the Andes Mountains.

Jewelry ad pulled: The Indian jewelry brand Tanishq withdrew an advertisement featuring an interfaith couple on Tuesday after Hindu nationalists accused the company of promoting “love jihad.” The term was coined by right-wing Hindus who have accused India’s Muslim minority of persuading Hindu women into marriage to convert them to Islam.

iPhone 12: Apple released four new iPhone designs equipped with 5G speeds. Our tech columnist can help you decide if you need an upgrade.

Global outlook: The International Monetary Fund said the world economy was beginning to recover from its worst downturn since the Great Depression. But the I.M.F.’s chief economist cautioned, “The ascent out of this calamity is likely to be long, uneven, and highly uncertain.”

Snapshot: Above, protesters in Lagos, Nigeria, on Tuesday demanding the end of a police squad known for brutalizing young Nigerians. The country’s president promised to dismantle the unit known as SARS, for Special Anti-Robbery Squad, but many are skeptical of that promise and have vowed to keep the pressure on.

What we’re reading: This Mother Jones article by a reporter who made 2,000 phone calls to people listed in Jeffrey Epstein’s little black book. “It’s a phenomenal feat of reporting and a gripping psychological portrait,” says Natasha Frost, who writes the Europe briefing.

Cook: These snickerdoodles taste of sweet butter and cinnamon, and have a secret ingredient: cream of tartar.

Watch: In “Evil Eye,” Sarita Choudhury plays an Indian mother scandalized by her daughter’s romance. The directors, the twin brothers Elan and Rajeev Dassani, keep the tension percolating before letting loose with a final confrontation that is truly something to see, our reviewer writes.

Go: Take a virtual tour of the small islands off the coast of Britain and meet the caretakers who spend their lives there in quiet solitude.

More discoveries await in our At Home collection of ideas on what to read, cook, watch and do while staying safe at home.

After 27 years and more than 2,500 reviews, Ben Brantley, The Times’s co-chief theater critic, is leaving his post. His departure comes during one of the strangest times that he could imagine for theater. He spoke to his colleague Jesse Green about his tenure.

How quickly were you introduced to — and how long did it take you to make your peace with — the blowback that often results from writing honestly about a show?

I expected the blowback, and it came pretty quickly. The public put-downs from celebrity stars are to be savored, I think. Interestingly, in my case, the attacks almost always came from white men: Alec Baldwin (“Orphans” — he said I was “not a good writer”), Josh Brolin (“True West” — he just said he hated me in highly charged language though we later made up by email).

How do you add up the pluses and minuses you’ve observed while writing more than 2,500 reviews during 27 years in the hot seat?

The roster of shows in the season interrupted by the pandemic showed a breadth of diversity and aspiration in form and content that I found incredibly heartening. I have often complained about the Las Vegas-ization of Broadway during my tenure, but in recent years I’ve seen new signs of life there. When theater comes back, it’s inevitably going to be limping, of course.

Even if you aren’t writing reviews, will you still see as many shows as always?

I’ll go as much as I can afford to.

And you won’t miss the perks and paraphernalia of the job? If I enter a theater without a notebook, I feel naked. Let alone the seats! Can you even sit in one that’s not J-101?

There’s a part of me that’s looking forward to attending as a civilian, even one who inhabits the peanut gallery. But once a critic, always a critic. There’ll always be a phantom notebook in my lap.

Thank you
To Theodore Kim and Jahaan Singh for the break from the news. You can reach the team at briefing@nytimes.com.

P.S.
• We’re listening to “The Daily.” Our latest episode is about the politics of pandemic relief in the U.S.
• Here’s our Mini Crossword, and a clue: Russian “no” (four letters). You can find all our puzzles here.
• The Times won the Edward R. Murrow Award for Continuing Coverage from the Radio Television Digital News Association, honoring work from “The Daily” that dug into China’s crackdown on the Uighur Muslims.

As Japan re-opens, a hospital grapples with coronavirus aftermath

In the Male World of Whiskey, More Women Are Calling the Shots