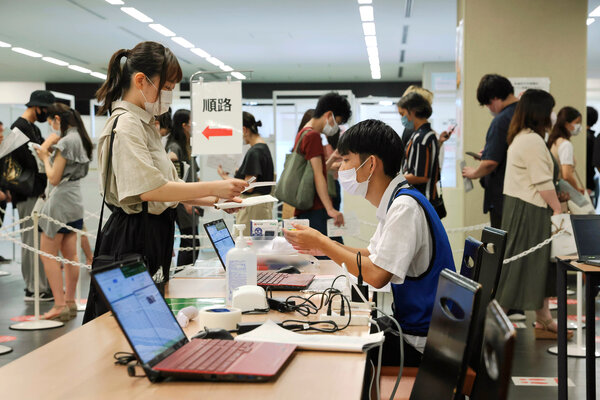 As Japan strains to control its coronavirus outbreak, and rein in cases at the Summer Olympics, the government is trying a new tactic: Public shaming.

On Monday, the health ministry released the names of three people who had broken rules after returning from overseas. An official statement said that the three — returning from South Korea and Hawaii — had failed to respond to calls from the health authorities as required.

They had all tested negative for the virus at the airport but subsequently failed to report their health condition.

Context: The Japanese government said in May that about 100 people a day were flouting the border control rules, and signaled that it would soon begin to disclose the names of violators.

The outbreak: There have been relatively few infections at the site of the Olympics — about 300. But nationwide, Japan reported 8,300 daily cases on Tuesday, a slight dip from the weekend’s records of more than 10,000.

Bangladesh is struggling to contain its worst wave of infections yet. The government exempted garment workers from a lockdown, allowing thousands to flock to Dhaka for work.

President Emmanuel Macron took to Instagram and TikTok to answer questions from vaccine skeptics in France.

Officials in Wuhan, China, will test all of its 11 million residents for the coronavirus after recording the first local transmission since the spring.

Letitia James, the New York State attorney general, unveiled the findings of a sexual harassment inquiry into Gov. Andrew Cuomo and declared that “we should believe women.”

The report found that Cuomo sexually harassed several women and retaliated against at least one who went public with her complaints.The investigation centered on allegations made by 11 women, nine of whom are current and former state employees, whose accusations include making inappropriate comments and engaging in unwanted kissing and touching.

Cuomo denied the allegations, saying he had “never touched anyone inappropriately or made inappropriate sexual advances.” The findings bolstered calls from across the political spectrum for Cuomo to step down or be removed from office.

Context: Cuomo was hailed as a national leader at the height of the coronavirus pandemic, but his reputation has since suffered because of the sexual harassment allegations and a scandal over the state’s handling of data on Covid-19 deaths in nursing homes.

Guan Chenchen, 16, and Tang Xijing, 18, of China beat out Simone Biles on Tuesday for the top prize in the final individual event for gymnastics.

Guan is a specialist on the balance beam and it showed at these Games — her first. With a routine much more difficult than that of her competitors, she had qualified first for the balance beam final. In men’s, China’s Zou Jingyuan also won gold for the parallel bars. China is leading the gold medal count.

Biles performed back handsprings and flips. She did not try the twists from the complicated and difficult dismount that was named after her. But she finished her routine with a smile, running to give her coach a hug. “I was proud of myself just to go out there after what I’ve been through,” Biles told Reuters.

The latest from the Games:

Karate made its Olympic debut in the place of its birth.

India was once a showstopper in field hockey; there are glimmers of that era in Tokyo. The women have a chance at gold, and the men at bronze.

Karsten Warholm of Norway set a world record and won the men’s 400-meter hurdles in 45.94 seconds.

Ukrainian police were investigating the death of a Belarusian antigovernment activist whose body was found in a park near his home in Kyiv.

Iraq reclaimed 17,000 looted artifacts in its biggest-ever repatriation. Cuneiform tablets and other objects had been acquired by a religious museum in the U.S. and Cornell University.

Alibaba reported a rebound with profits and revenue up in the second quarter, after a $2.8 billion antitrust fine led it to report a rare loss the quarter before.

What else is happening

Athens recorded its highest temperature ever this week as the severe heat wave in Southern Europe did not let up.

Reese Witherspoon, the Oscar-winning actor, reached an agreement to sell her studio, Hello Sunshine, to a newly created company backed by the investment firm Blackstone Group.

For most of the population in Fresnillo, a mining city in central Mexico, a fearful existence is the only one they know. Since the government began its war on the drug cartels 15 years ago, murder statistics have shot up. “We’re living in hell,” said Victor Piña, who ran for mayor.

Some of the most fun Olympics coverage isn’t coming from the major broadcasters — it’s on TikTok.

Athletes from a host of countries in sports that run the gamut have been posting everything from day-in-the-life videos at the Olympic Village, such as one shared by Nick Rickles, an Israeli baseball player, to stress tests of the much-discussed cardboard bed frames, like the one posted by the New Zealand swimmer Lewis Clareburt.

Their performances in prime time can be limited to mere seconds, with the focus on whether they win a medal. But on the app, athletes can be more personable. Courtney Hurley, an American fencer, poked fun at herself after she drummed up enthusiasm for her game and then lost. When they win, the athletes can share the joy — as did Jessica Fox, an Australian who won gold in canoe slalom.

Some of the content shows the grueling training that Olympians go through, like Australian divers doing handstands on treadmills, and New Zealand’s team pushing cars and lawn mowers.

But most of it is just fun. Ilona Maher, an American rugby player, posted videos of her and her teammates engaging in silliness in the dining halls, professing love for J. Lo and basking in TikTok fame. It’s a reminder that many of the athletes are just twenty-somethings or even teens. — Melina

Tender fish skewers topped with herbs and lime are a great weeknight meal.

Three new memoirs explore dealing with illness and have a lot to say about desire, pain and unlikely sources of joy.

The latest episode of “The Daily” is about American businesses struggling to find workers.

Opinion | Covid Spreads in Clusters. We Need to Track Them.