We’re covering episodes of violence in Hong Kong, and a bittersweet reopening of the Taj Mahal. 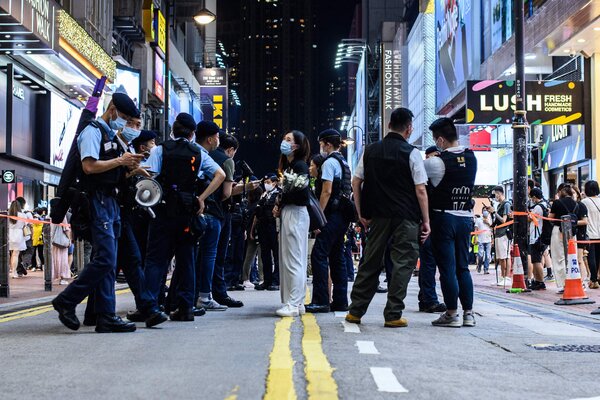 Last week, on the anniversary of Hong Kong’s handover to China, a man stabbed a police officer on a busy commercial street, then killed himself. Then, on Tuesday, the police said they had arrested nine people — including six teenagers — over alleged plots to make bombs and plant them in public areas.

Authorities cast the incidents as proof of the threat posed by some parts of the opposition. But the specter of violence is seen by some activists as the inevitable result of Beijing’s crackdown, in which restrictive laws have made peaceful resistance impossible.

Some also suggest that police have overstated the threat of violence. Though the police have announced foiled bomb plots since anti-government protests erupted in 2019, few suspects have gone to trial, making the threat difficult to assess.

Context: The events reopened an uncomfortable debate within the pro-democracy movement on whether it condones or supports violence, such as during the 2019 protests, when some threw Molotov cocktails or attacked Beijing supporters. This past week, the attacker drew sympathy online, and bouquets were left where he died.

“I think even in the past year, the line has been pushed forward,” Ivan Choy, a political scientist at the Chinese University of Hong Kong, said.

The crowds that usually throng India’s most famous monument at sunset have been reduced to a handful of mostly local residents lately, roaming around the 25-acre complex for just over $3 a ticket.

Warnings that another wave of infections may be looming have cast a pall over lives that feel stuck in limbo. As India emerges from a devastating wave of the virus, the authorities have slowly reopened. With only 4 percent of the population vaccinated, though, the risks are always front of mind.

The Taj Mahal, on its busiest days since reopening, is hosting 2,000 visitors — less than one-tenth its capacity. It needs ticket sale money to make necessary repairs, and around half of Agra’s 1.6 million people are dependent on tourism. But many tourism business owners in the area say that they don’t want the risk.

Quotable: “Don’t sacrifice your life to visit the Taj Mahal,” said one guide.

Luxembourg’s prime minister was hospitalized and in “serious” condition because of his low blood-oxygen levels.

Israel and South Korea have agreed to swap hundreds of thousands of doses of the Pfizer-BioNTech vaccine. Israel is sending much-needed expiring doses to Korea, and South Korea will send back the same number in September and October.

The Taliban have implemented a broad strategy of trying to rebrand as capable governors while they press a ruthless, land-grabbing offensive across the country.

It’s a stark signal that the insurgents, aware of their legacy of harsh rule, fully intend to try for all-out dominance of Afghanistan once the U.S. withdrawal is finished.

But the signs that the Taliban have not reformed are increasingly clear: An assassination campaign against government and security workers continues, there is little effort at peace talks, and women are being forced out of public-facing roles and girls out of schools. There is fear that worse is on the horizon.

On the ground: Districts were not always taken through sheer military force. Some fell because of poor governance, others because of local rivalries and low morale among security forces. Documents and interviews with insurgent commanders and Taliban officials show that the success of the group’s recent surge was not entirely expected, and that Taliban leaders are haphazardly trying to capitalize on their gains.

A passenger plane with 28 people aboard crashed in far eastern Russia on Tuesday, a blow to the country’s aging domestic aviation industry. There were not believed to be any survivors, Russian news agencies reported.

Oil prices spiked after the OPEC Plus countries failed to break their deadlock on production increases.

The Israeli parliament on Tuesday voted against extending a law that effectively bans citizenship or permanent residency for Palestinians from the occupied territories if they marry Israelis.

A trade group representing Google, Facebook, Amazon, Apple and others warned Hong Kong’s government that changes to the city’s data-protection laws could stop firms from providing services there.

The Rev. Stan Swamy, a Jesuit priest with Parkinson’s disease, died on Monday at a hospital while still in police custody, his lawyer said. His arrest sparked outrage over an unpopular antiterrorism law, which critics say is used to stifle dissent.

The changing climate in Hawaii — wetter winters, drier summers — is fueling a surge in wildfires.

The approach of Tropical Storm Elsa is complicating search efforts at the site of a collapsed condominium building in Surfside, Fla.

After winning their matches, Ashleigh Barty and Angelique Kerber will face off in the Wimbledon semifinals on Thursday.

Women who faced sexual assault by the Egyptian police spoke out to The Times in interviews, saying they felt they had no path for justice. They feared arrest and worried about stigmatizing their families. One police officer said that the abuse was rampant: The goal, he said, was not to gather evidence but to “humiliate your humanity.”

A generation of spelling bee champs

Every year, about 11 million kids in the U.S. participate in school-level spelling bees. The most ambitious middle and elementary schoolers set their sights on the Scripps National Spelling Bee, which takes place this week.

There’s a well-documented pattern among recent winners, as Anna Kambhampaty writes in The Times. Every year since 2008, a South Asian American child has been crowned a champion at the competition. This year, at least nine of the 11 finalists are of South Asian descent.

The trend can be traced back to 1985, when Balu Natarajan became the first child of immigrants to win Scripps. That win prompted an outpouring from people of South Asian descent. “We really had no idea that we were doing this for a community,” Natarajan said. “We were just this tiny fraction of the participants.”

Now, there are spelling bees tailored to South Asian children and coaching companies founded by South Asian Americans. Indian grocery stores often feature fliers for local bees. “The community created an infrastructure for the kids to really thrive and excel in this area,” Shalini Shankar, an anthropologist, said.

This Bangladeshi-style chicken korma is gently spiced and enriched with yogurt instead of cream or nuts, resulting in a light, bright sauce.

“No. 7 Cherry Lane,” which tells the story of a forbidden affair in 1960s Hong Kong, is “deeply eccentric,” Isabelia Herrera writes.

“The Secret Life of the Savoy,” by Olivia Williams, is a thorough and entertaining account of the palatial London hotel.

P.S. Nikole Hannah-Jones, the Times journalist behind the 1619 Project, is joining the Howard University faculty in the newly created Knight Chair in Race and Journalism position.

The latest episode of “The Daily” is about the rise of the Delta variant.

“It costs the taxpayer”: Some Vancouver playgrounds fenced off due to COVID-19 scofflaws