Myanmar’s women on the front lines.

We’re covering the women adding spine to Myanmar’s protests, a clampdown by Italy on vaccines headed to Australia and a new spotlight on drag kings. 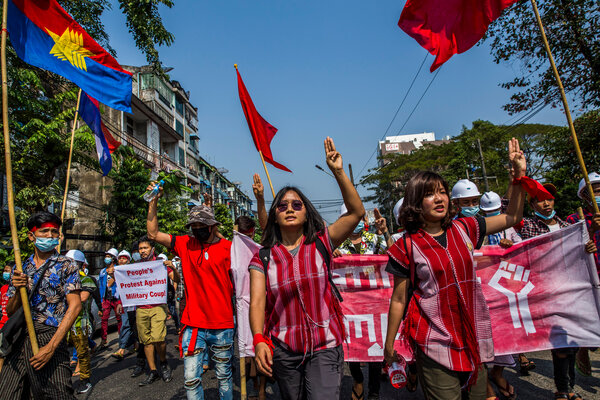 The female ‘heroes’ of Myanmar’s protests

Women are at the forefront of Myanmar’s protest movement, sending a powerful rebuke to the generals who ousted a female civilian leader, Daw Aung San Suu Kyi, in a coup last month and reimposed an order that has suppressed women for half a century.

By the hundreds of thousands, they have gathered for daily marches, representing striking unions of teachers, garment workers and medical workers — all sectors dominated by women. Female medical volunteers have patrolled the streets to help the wounded.

Women have added spine to a civil disobedience movement that is crippling the functioning of the state. The youngest are often on the front lines, where the security forces appear to have singled them out. Two young women were shot in the head on Wednesday and another near the heart: three bullets that ended their lives. At least 38 people were killed on Wednesday, the biggest one-day toll since the Feb. 1 coup.

Dynamics: There are no women in the military’s senior ranks, and soldiers have systematically raped women from ethnic minorities, according to the United Nations. More broadly in society, though, women’s roles in politics, business and manufacturing are growing. In elections this past November, about 20 percent of candidates for the National League for Democracy, Ms. Aung San Suu Kyi’s party, were women.

Lives lost: Ma Kyal Sin, 18, was one of the protesters killed on Wednesday. “She is a hero for our country,” said one of her close friends.

A vaccine feud between Italy and Australia

Italy blocked a shipment of the Oxford-AstraZeneca vaccine from being flown to Australia on Thursday, making good on the European Union’s threats to clamp down on exports of the shots and ratcheting up a global tug of war over vaccines.

The Italian foreign ministry said that it had made the request to block the shipment, which consisted of more than 250,000 doses, and that the E.U. did not object. It is the first time that a member country used new E.U. regulations to halt vaccine exports.

A ministry spokesperson said Italy made the request because Australia is classified as a “non-vulnerable” country and Europe is experiencing a shortage of vaccines and shipment delays.

Context: Under the E.U.’s new controls, any export of doses manufactured within the bloc can be halted unless the maker first meets its supply obligations to the member countries.

The European Union drug regulator announced that it was beginning a rolling review of the Russian-developed Sputnik V vaccine, after Hungary authorized it for use and the Czech Republic announced it would do the same.

The E.U. gave a district in Austria an extra 100,000 vaccine doses for anyone over 16 in an attempt to stamp out a surge driven by the variant first identified in South Africa.

Pope travels to Iraq on a mission to heal

Pope Francis is beginning a three-day visit to Iraq today, despite worries that the trip could become a superspreader event in a country where the virus still rages.

Such a visit has been the goal of many popes before him, who had to cancel plans because of security concerns in a nation ravaged by war. Francis accepted an invitation that was extended in July 2019, and the Vatican believes the risks are outweighed by the chance to support one of the world’s oldest Christian communities.

Iraqi Christians have seen their ranks dwindle for years — cut by roughly a third of the 1.5 million who lived there during the final years of Saddam Hussein’s rule.

Concerns: Francis, 84, was vaccinated against Covid-19 in mid-January. The Vatican insists the trip will be safe but the pope is planning a large mass in a soccer stadium in the Kurdish town of Erbil, and will very likely draw crowds to watch him pray in Qaraqosh, a town of Syriac Catholics, in the northern Nineveh Plains.

Highlights: Francis plans to visit Baghdad first, where he will meet with officials and then visit Our Lady of Salvation, the church where 50 people were killed in a 2010 attack. In Najaf, he will meet with Grand Ayatollah Ali al-Sistani, who rarely meets with foreign dignitaries.

If you have 7 minutes, this is worth it

A food critic’s journey after Covid

After contracting the coronavirus in December, the Times food writer Tejal Rao was left depressed and disoriented when her sense of smell disappeared. “All of the foods I loved became unrecognizable, turning into a series of unappealing textures,” she wrote.

To help recover what she had lost, Tejal turned to smell training, which involved hours of sniffing particular scents. “Recognizing a smell when you’re in training can feel a lot like picking up a fragment of a familiar song from a passing car,” she said, “hooking onto the short sequence of notes you recognized, and having the name of it just on the tip of your tongue.”

South Korea trans rights: Byeon Hee-su, a transgender woman who was expelled by the South Korean military last year after her gender-reassignment surgery, has been found dead at her home south of Seoul. The police are investigating the cause of death.

Hong Kong: A senior Communist Party official announced that China’s national legislature planned to rewrite election rules in Hong Kong to ensure that the territory was run by patriots — people loyal to Beijing and the Communist Party. The congress will discuss a draft plan when it gathers for a weeklong session starting on Friday.

In memoriam: The Japanese artist Toko Shinoda’s fluid, elegant work owed much to calligraphy, but she also complemented its ancient serenity with the influence of Jackson Pollock and Mark Rothko. She died at 107.

Snapshot: Above, Wang Newton, a New York drag king. Drag kings were once an underappreciated part of the drag world. But with pageants moving online during the pandemic and the popularization of drag for wider audiences, they have found more exposure.

What we’re reading: This deep-dive New Yorker article on the U.S. military withdrawal from Afghanistan. It’s a chilling report on the near-future in the war-torn country.

Cook: This spiced chickpea salad has all the fresh flavors of a great falafel sandwich — tahini, mint, paprika, cucumber, cumin, garlic — plus the crunch of pita.

Watch: The thoughtful documentary “Stray” uses the stray dogs of Istanbul to comment on the human condition.

Listen: Rap and poetry have long been intertwined. American poets share some of the tracks that have inspired them.

Get ready for a fun weekend with our At Home collection of ideas on what to read, cook, watch, and do while staying safe at home.

Melissa Kirsch spends her days thinking up activities for us to do at home in The Times’s At Home newsletter. She shared some of her own strategies for living well during an uncertain time.

Think about how I want to look back on this time. I find myself consciously trying to do things that will make me feel better about this experience in the future. That may mean reading more or cooking more or trying to be creative about the ways that I connect with other people — like writing letters or meeting people for walks in the cold. I don’t want this year to turn into a blur of Zoom chats and Netflix.

Make exercise part of my “social” life. When my daily life is busy and chaotic, I often treat exercise as a solo activity. But I’ve started jogging without headphones, purposely trying to take advantage of the moments when I’m outside the house and around other people, even if I’m not deliberately interacting with them.

Create a tiny routine. These can be small pleasurable things. It can be deciding that you’re going to just have coffee on your stoop every morning or to walk your dog at 1 p.m. I make my bed each morning and do the crossword puzzle during lunch. These are pretty rudimentary elements of a day, but they’re two poles between which to hang the hours of the morning.

P.S.
• We’re listening to “The Daily.” Our latest episode is about how close the end of the pandemic might be.
• Here’s our Mini Crossword, and a clue: Pomme de ___ (French for “potato”) (five letters). You can find all our puzzles here.
• Our travel writer Tariro Mzezewa joined the “Travel with Hawkeye” podcast to discuss plans for a vaccine passport.