We’re covering the global shock waves from a mob attack on the U.S. Capitol, an expected big contraction in India’s economy and 52 places to love this year. 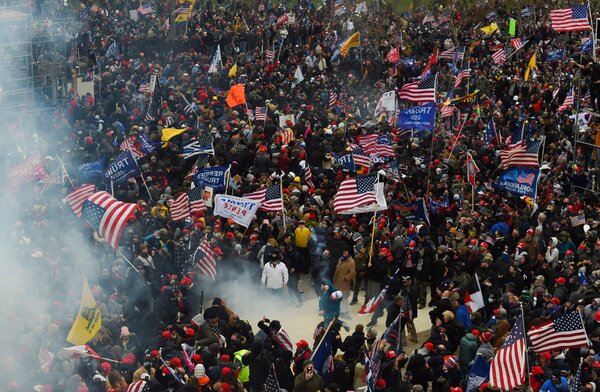 The world sees America’s turmoil as a warning

Global leaders watched as a mob stormed the U.S. Capitol, an attack in which four people died, and many saw it as a warning to democracies everywhere. Several placed the blame squarely on President Trump.

Prime Minister Jacinda Ardern of New Zealand said she and others in her country were “devastated” by the events. Chancellor Angela Merkel of Germany did not mince words about Mr. Trump’s role. “He stoked uncertainties about the election outcome and that created an atmosphere that made the events of last night possible,” she said.

The institutions of democracy prevailed, but the images of mob rule in Washington touched a particular nerve in fractured Western societies, our Paris bureau chief writes. If it could happen at democracy’s heart, it could happen anywhere.

The latest: In the U.S., there were growing calls for Mr. Trump’s immediate removal from office for his role in urging on the violent mob, and a wave of resignations. Facebook announced it would block Mr. Trump from posting through the end of his term, including on Instagram, which it owns. Twitter suspended the president’s account, and the shopping platform Shopify shuttered the campaign’s online store. Charges against the rioters may come today. At least 52 people have been arrested, including five on weapons charges.

Japan declares a state of emergency

After three days of record coronavirus counts and a rapidly rising death toll, the Japanese government declared a state of emergency in Tokyo and three surrounding prefectures on Thursday — the first such declaration since April.

The state of emergency will last one month and relies mostly on voluntary compliance. The government is asking restaurants to close earlier, employers to encourage staff to work from home, and residents to mostly stay home — but schools, cinemas, gyms and shops will stay open.Health experts warn it may not be enough to turn the tide.

Prime Minister Yoshihide Suga had, for days, resisted appeals for action from governors in affected prefectures, out of concern that the new restrictions would hurt the economy, but he eventually bowed to the pressure. Japan’s vaccinations are not set to start until the end of February.

Context: Deaths from the virus in Japan have doubled in less than two months, passing 3,700, and Tokyo’s governor has warned that the medical system is under stress. Polls have shown dissatisfaction with Mr. Suga’s handling of the pandemic.

Officials in Brazil said that a coronavirus vaccine made by a Chinese company was effective. If approved, it could help fill a void in poorer nations.

The police in Thailand have issued arrest warrants for a husband and wife who helped smuggle 19 immigrants from Myanmar, including seven who tested positive for the coronavirus.

As Americans were transfixed by the spectacle of the Capitol under siege, officials reported at least 3,964 new coronavirus deaths in the U.S. on Wednesday, a new single-day record.

The Indian economy is expected to report its worst performance since 1952, a 7.7 percent contraction in the current financial year ending in March, according to an estimate released by the Central Statistics Office.

It follows several quarters of contractions. The finance minister is likely to push for growth in the next budget, Reuters reports, to be presented on Feb. 1. The annual budget will most likely include more spending on infrastructure and incentives for manufacturers. Another boost is likely to come from the Covid-19 vaccines rolling out soon.

The big picture: The Times has been reporting on the Indian economy through the pandemic, as it took a sharp turn after an abrupt lockdown. Even before the pandemic, economic growth was slowing.

If you have a chunk of time, this is worth it

Varun Suchday, of Bhuj, India, is always on the lookout for roads that don’t exist on maps, talking to locals to get their directions. When the pandemic hit, he heard of special rock formations in Kaliya Dhrow, India. He rode a motorcycle for hours, and eventually happened upon “this marvelous, endless landscape of red: streaks of crimson, saffron — orange.”

He’s one of the readers who have shared stories about some of their favorite spots during a dark year. Here is our list of 52 beloved places, which this year replaces our Travel desk’s usual “52 Places to Go.”

Gay rights in Indonesia: An Indonesian police officer who was dismissed from the force because of his sexual orientation has lost his legal fight to be reinstated, after a Central Java court rejected his lawsuit, according to Reuters.

Snapshot: Above, the luxury Landmark Mandarin Oriental is one of Hong Kong’s quarantine hotels. The government’s abrupt extension of the quarantine requirement for international travelers — to three weeks from two — caused chaos for domestic workers and travelers, who are scrambling to extend reservations, cancel plans or get their employers to pay for more nights in a hotel.

What we’re watching: This BBC report on life in Beijing as the coronavirus pandemic eases. The interviews with Chinese shop owners and residents in the streets of the capital offer an interesting glimpse at China’s recovery.

Cook: This pan pizza pays homage to the buttery, high-lofted pie, with a crisp bottom crust, a slightly sweet sauce and an enormous amount of cheese.

Listen: The flute is an instrument based on the most fundamental sign of life: breath. Listen to the best music ever written for it.

Do: Want to exercise more this year? Then adopt workout goals that are challenging but not too challenging, tough but doable. Or maybe just plan to walk at least an extra 500 steps most days.

We can help you take on a new project. At Home has our full collection of ideas on what to read, cook, watch, and do while staying safe at home.

How to fix the vaccine rollout

From our Opinion section, experts shared their ideas on how to improve vaccine distribution in the U.S. Here are some excerpts.

Make it a lottery. U.S. states are already facing substantial lobbying over which professions should be deemed frontline. If mass transit workers count, what about Uber drivers? Then there’s the practical question of how a pharmacy will determine whether someone truly is a preschool teacher or a grocery store clerk. We should focus on people over 55, and for the rest, a lottery. Few would love the idea, but it would be equitable and apolitical.

Target hot spots. Things get more complicated in the second phase of vaccination, which will start in late January or early February, assuming that we can accelerate the sclerotic pace of the rollout. We could quickly and easily select the communities with the most new coronavirus cases per capita over the previous two weeks. We should also focus on places with a minimum absolute number of newly infected people, to gain critical mass and avoid having the scarce vaccines dispersed across small populations.

Write better algorithms. Everyone using algorithms for vaccine distribution should follow key principles, including: making sure the algorithm’s outcome is what we actually care about, taking the time to do a dry run, building public trust, and monitoring and updating your algorithm even after vaccine deployment.

P.S.
• We’re listening to “The Daily.” Our latest episode is on the assault on the Capitol.
• Here’s our Mini Crossword, and a clue: Parts of the Mona Lisa that seem to follow you (four letters). You can find all our puzzles here.
• Stephen Dunbar-Johnson, the president of the International New York Times, was interviewed by I-Magazine on the newspaper’s global growth in subscribers.