Three New York City transit employees have been busted for quite literally setting up an underground clubhouse for themselves beneath Grand Central Terminal, where they would drink beer, watch TV, and nap on the job.

The Metropolitan Transit Authority (MTA) says it suspended the employees without pay after it discovered their secret “man cave” under the city’s busiest transit hub.

“Many a New Yorker has fantasized about kicking back with a cold beer in a prime piece of Manhattan real estate — especially one this close to good transportation,” said MTA Inspector General Carolyn Pokorny in a statement. “But few would have the chutzpah to commandeer a secret room beneath Grand Central Terminal and make it their very own man-cave, sustained with MTA resources, and maintained at our riders’ expense.”

The three employees are described in Pokorny’s report as a wireman, a carpenter foreman and an electrical foreman. All three were assigned to overnight shifts.

Authorities were tipped off to the secret lair’s existence in February 2019, when someone reported a “man cave” where three employees would “hang out and get drunk and party.”

Investigators went looking for the “unauthorized break room” in August 2019 and ultimately found it hidden behind a locksmith storage room at the station. They had to call in a locksmith just to get in.

The room was pretty sweet, according to Pokorny’s report. Employees had somehow wrangled a futon couch into the room, along with a big-screen TV, a fridge, a microwave and a streaming device. They’d also outfitted the room with a series of clever cabinets to disguise the amenities when they were not in use.

Investigators found a half-consumed beer in the fridge and a brand new air mattress stashed in the room, along with a receipt that included one of the employee’s names on it. 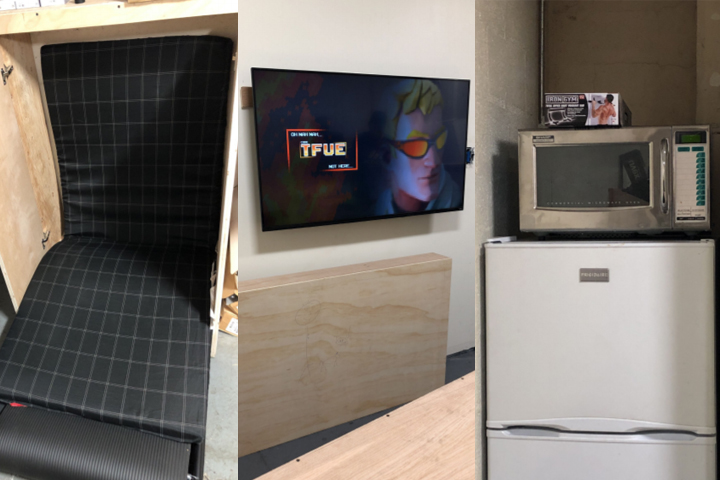 The breakroom was shut down due to potential safety hazards and misuse of company resources.

“The employees who were involved are on the overnight shift, but this is an unauthorized break space, unknown to their supervision and completely unacceptable, and behaviour that is outrageous and something that I’m very angry about,” Catherine Rinaldi, president of Metro-North, told CBS New York.

She described the room as a “completely inappropriate, unacceptable use of their time.”

Transit officials say they plan to map the labyrinthine underground rooms connected to the rail system in the future.

They’re also re-examining the process for handling complaints after no one immediately looked into the first report in February.

Commentary: Why Trump’s border wall would backfire on him

Opinion | There Are Better Ways for Bloomberg to Spend His Money