This is an article from World Review: The State of Democracy, a special section that examines global policy and affairs through the perspectives of thought leaders and commentators, and is published in conjunction with the annual Athens Democracy Forum.

“To sin by silence, when we should protest, / Makes cowards of men” sounds like a slogan from any of the innumerable Black Lives Matter marches that have erupted around the world this year. A contemporary reading might be distilled to: #ProtestMatters. The quote’s source? The poet Ella Wheeler Wilcox, whose poem “Protest” was published in 1914.

Protest is the foundational variable of the American experiment. Every pivot point in the history of our country is rooted in it. From the Boston Tea Party of 1773 to the Rev. Dr. Martin Luther King Jr.’s immortal “I Have a Dream” speech at the Lincoln Memorial in 1963, a nation “of the people, by the people” is only as robust and defensible as its protections of the right to protest.

Protests led by Black Americans, though often unrecognized, have been particularly crucial to every great political movement in this country. From Crispus Attucks (the first martyr of the Revolutionary War) to Ida B. Wells and the Black suffragists fighting for women’s right to vote, Black and brown people have always protested for comprehensive systemic change and freedom for all Americans, even when they’ve been denied freedom themselves.

There is a humorless irony here, and a potent reminder for every self-defined “patriot” who decries the “looting and rioting” of this past summer. The ideals of life and liberty that our nation holds dear — and the landmark moments in our history that have helped more fully to realize those ideals — were shaped and won by the protests and sacrifices of Black Americans. Protests and sacrifices not so different from those being denounced today.

Those unfamiliar with “no justice, no peace,” the oft-used mantra of the protest movement that arose in 2020, should first look to the lineage and legacy of nonviolent protest in the United States. Many forget that, in his later career, Dr. King wrestled deeply with the possibility of violence within emergent resistance movements. When Dr. King famously reminded America that “a riot is the language of the unheard,” he was acknowledging the depth of tension threatening to further divide our nation — between the landmark successes of the nonviolent civil rights movement he had become the face of, and the ruinous social and economic inequalities that reigned supreme.

Dr. King’s concerns proved prescient. Following years of largely peaceful protests, the next generation of Black freedom fighters adopted new approaches to highlighting the urgency of their cause. But by then, Dr. King’s stance on riots had evolved. He characterized their vehemence as a necessary component within an overarching system of effective political protest and began calling these riots “durable social phenomena.” In this acquiescence, he redirected our attention back to the logic underpinning nonviolent protest.

All such protests rely on a core assumption: that societies believe in — and universally agree to abide by — shared social contracts. Thus, “(if) the violations of law by the white man in the slums over the years were calculated and compared with the lawbreaking of a few days of riots,” Dr. King ultimately concluded, “the hardened criminal would be the white man.” Dr. King recognized, in other words, that the real looters were the people devaluing Black bodies. Then as today, the root of our nation’s resistance to anything resembling “violence” accompanying Black political expression lies within a denial of America’s own violent past — as well as its complicit present. 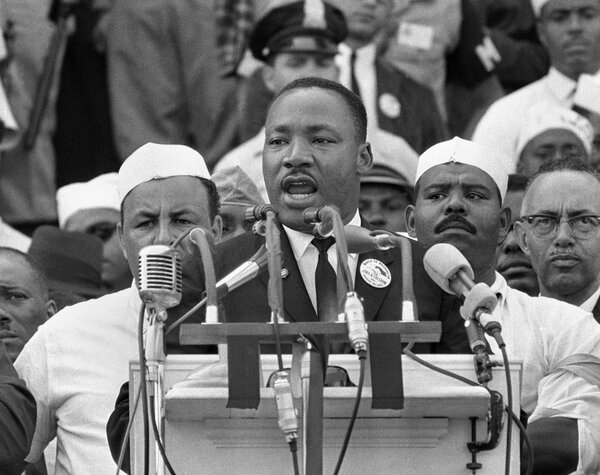 The primary purpose of protest is to ensure that all voices are heard. For our democratic experiment to survive, we must perpetually evolve our approach to demanding accountability and transparency from our governments and elected officials. America’s political leaders, chosen by us, are responsible — first and foremost — for listening and responding to our cries for hope, freedom and liberation. On paper, this is America’s deepest commitment to its people.

The Black Lives Matter movement has deep roots in the past and a promising future. The outsize international, national and state-level responses to weeks of peaceful protests following the murder of George Floyd — with demonstrations in Minneapolis and London, Madrid and Seoul, Sydney and Rio de Janeiro — reinforced a truth we have always known: Protests matter, and they have the power to change both legislation and the course of history.

Each day this summer, as the number of protesters grew around the world, I gained hope for our future. Hope for our country. Hope for our children, and for our world. Because as our words and our work created a global groundswell, many of the crystalline calls to action we directed at high-level leaders were answered. Police budgets were slashed. Chokeholds and tear gas were banned. Racist cops were suspended without pay, fired and charged for their crimes. Legislation was introduced to prohibit states from buying military-grade equipment from the federal government. Reparations to victims’ families were issued.

As the Black Lives Matter movement continues to grow, I ask that anyone proud to be part of (or hoping to join) our ever-evolving country continue to educate themselves on both the roots of and the reasoning behind calls for “nonviolence.” Are such calls seeking solutions, or are they demanding silence from protesters?

To our neighbors, our allies and our elected officials: Take note of what matters most to your communities. Remember that, with each act of protest on behalf of Black Americans, we are, as we have always been, protesting for your rights as much as for our own. For your families. For your futures. For the true freedom that, as a common American people, we all so richly deserve.

Patrisse Cullors is a co-founder of the Black Lives Matter Global Network.

Opinion | Why Do Republicans Hate Cops?

Baltic states to hit Lukashenko, other Belarus officials with sanctions