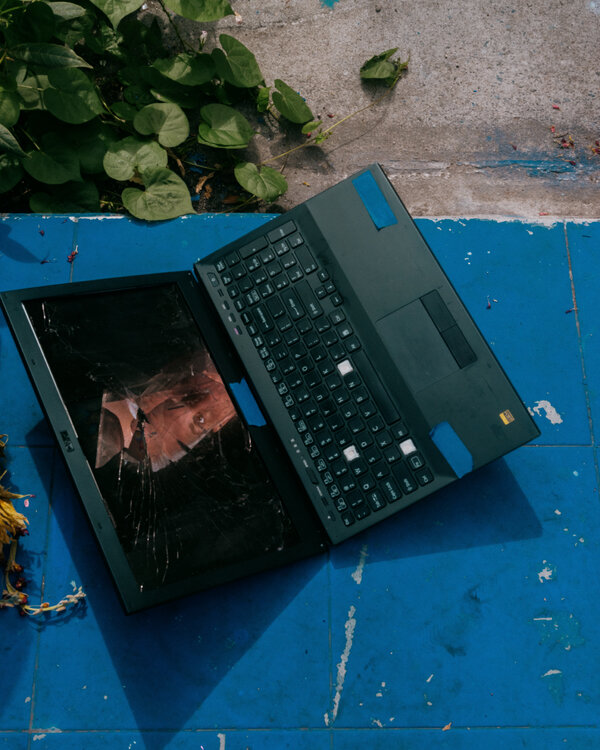 I was speaking in tongues. I was lying on my side on a plastic-covered couch, my neck craned over its arm, my mother beside me consulting with a doctor, and I was speaking in tongues. Some spirit was moving through me, causing me to regurgitate all that I had seen in the years leading to this moment. This spirit was not the Lord or any other celestial being. I knew exactly what I was referring to with each word and could envision the source material as my lips pinballed through my memory. It was, to my surprise and dismay, months and months of quotes and quips I had read since the inception of the Facebook News Feed, now bubbling up from my subconscious in an inscrutable cacophony of youthspeak.

This wasn’t my first trip to a hospital, but the verbal brain dump was new. I had resisted care too long this time, and my ability to keep it together on the outside gave way to this. That I appeared to be speaking in tongues was, of course, alarming to those around me, and as far as I can remember, it sped up the hospital intake process. No one ever asked me about the contents of my ramblings, though. Maybe it was beside the point, but it was perhaps a harbinger of a growing problem: the tonnage of non sequiturs social media pumps into our minds on a daily basis and the psychic noise it can create.

Facebook introduced its News Feed feature in September 2006, five months after my bipolar I diagnosis and first hospitalization and two years before this explosion of seeming gibberish. This timing is notable because my brain was still getting accustomed to its new reality. This new reality meant daily doses of high-strength prescription medication, navigating my social landscape with newly delicate sensibilities and consuming hundreds of updates from my friends. While I do not believe that my social media usage caused my illness, the heightened noise created by the News Feed had an obvious impact on my 2008 episode.

The way I understand my bipolar disorder is that it doesn’t so much create as reveal, peeling me away until I am nothing but raw subconscious activity. In this moment in 2008, it revealed, among other things, a propensity for addiction. The addictive potential of social media is well documented and keenly felt. My proclivity toward addiction — manifested in, among other things, nicotine and love — leaves me particularly susceptible to the allure of the scroll, the double tap, the committing to subliminal memory of every detail I consume. Though I now make an effort to not let myself be consumed by my online presence and network, sticking to casual usage does not stop the noise, and by the time it is loud enough for me to consciously hear it, my brain is irrevocably entrenched in maladaptive thought patterns that put me at risk of ascending into madness.

Chaos brain isn’t a medical condition, but I believe it is a threat in itself — a precursor and warning sign. In fact, while research is still emerging in this area, a 2011 paper chronicled three cases of individuals who, with no known history of prior major psychiatric disorder, presented for psychiatric treatment because of psychotic symptoms that appeared while they were immersed in computer-mediated communication, such as social media and chat functions. This type of communication led to the emergence of “a ‘hyperpersonal’ relationship with a stranger, mistrust of the aims and identity of the other party, blurred self boundaries, misinterpretation of information and undesirable personal exposure in cyberspace,” the paper said. A much larger study has linked addictive social media use to attention deficit hyperactivity disorder, obsessive-compulsive disorder and anxiety. A 2018 study showed that social media usage predicts detrimental changes in mood in people with and without psychosis. Sensitivity to social media usage may fall heavy in hands like mine, but it has the potential to affect a wide array of people all the same.

A broad research review from 2020 found that evidence from different types of studies implicates smartphone and social media use in “the increase in mental distress, self-injurious behavior and suicidality among youth.” The review proposed a number of approaches, including a harm reduction approach, and described strategies such as reduced screen time, good sleep hygiene (like no screens one to two hours before bed) and nonjudgmental communication in therapeutic and home environments. I have lived in these spaces long enough to know that well-intentioned harm-reduction strategies may not be enough. These do not fully solve for daily or hourly doses of content injected straight into the subconscious or the performative nature of posting. No trigger has been a more consistent presence in my bipolar disorder than ordinary social media usage.

But so many Americans are dependent on social media for community and meaning, and going completely off the grid may not be sustainable. It certainly isn’t for me. My weariness with, or my fear of, the noise in my brain does not stop me from participating in the apparatuses that contribute to that noise. How do we address these ill effects via therapeutic remedies?

Opinion | Are the Olympics Too Broken to Fix?

Opinion | There Are Better Ways for Bloomberg to Spend His Money