Last week, President Biden issued a robust endorsement of the Protecting the Right to Organize Act, or PRO Act, the most far-reaching pro-union legislation in decades, which would make forming unions easier and make it harder for companies to fight against unionization.

So far, he appears poised to deliver on his campaign pledge to “be the most pro-union president you’ve ever seen” — the sort of lofty promise made and later broken by recent presidents, Republican and Democratic alike.

Some union leaders feared the same about President Biden, especially because of his close ties to corporations when he was a senator from Delaware. But late last month, he posted a two-minute video online that defended and praised unions. “Unions built the middle class,” Mr. Biden said. “Unions lift up workers, both union and nonunion, but especially Black and brown workers.”

Although Mr. Biden didn’t mention the continuing drive to unionize almost 6,000 Amazon workers in Alabama, his remarks were widely seen as a boost to that campaign. He added that it was his “administration’s policy” to support union organizing and said employers shouldn’t use anti-union propaganda or intimidation to beat back unions.

“His statement was very powerful,” William P. Jones, a history professor at the University of Minnesota, told me. “It’s really important that he portrayed labor not as a narrow constituency, but as a movement connected to his other priorities — that it’s a force for racial equality and gender equality.”

But while giving a pro-labor speech is one thing, delivering on policy is another, Professor Jones noted. Walking a consistent pro-union walk may prove hard for Mr. Biden; some Democratic centrists as well as corporate America will no doubt push him not to be too pro-labor. So far, though, Mr. Biden has been going beyond rhetoric — as far as Congress will let him, at least.

For instance, he’s the first Democratic president since Woodrow Wilson to nominate a former union leader to be secretary of labor: His nominee, Marty Walsh, used to head Boston’s federation of building trades unions before becoming that city’s mayor. Mr. Biden championed a $15 minimum wage from his first days as president, incorporating a phased-in version into his $1.9 trillion Covid relief package. It didn’t make it into the final package, but he may use executive action to install a $15 minimum wage for federal contractors. On his first day in office, Mr. Biden also took the unorthodox step of firing Peter Robb, the National Labor Relations Board’s strongly anti-union general counsel, long before his term was up. 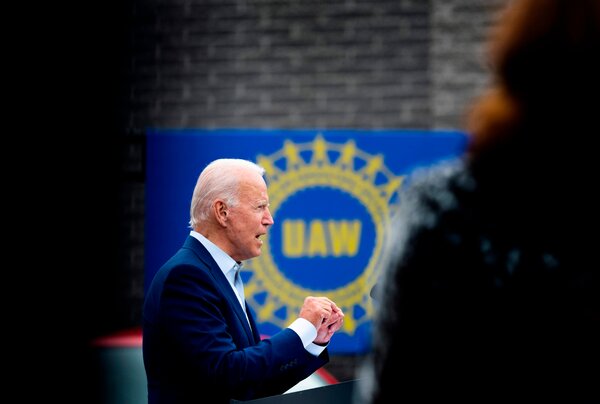 For Americans born in the 1970s or afterwards, it won’t be hard to see Mr. Biden as the most pro-labor president in living memory. Jimmy Carter infuriated unions by deregulating the trucking and airline industries — a move that hobbled many unionized companies and wiped out the jobs of tens of thousands of union members.

Bill Clinton, never an enthusiastic supporter of unions, did push some labor-backed measures, like a bill to prohibit companies from permanently replacing strikers. (Naturally, a Republican filibuster prevented passage.) But unions most remember Mr. Clinton for pressuring Congress to ratify the North American Free Trade Agreement, a deal that labor advocates correctly predicted would cause a large loss of factory jobs to Mexico. They were further irked when Mr. Clinton normalized trade relations with China, a move that several prominent economists now say cost more than one million American factory jobs.

Labor leaders applaud Barack Obama for helping millions of workers with the Affordable Care Act. Union leaders also praise him for supporting the Employee Free Choice Act, which would have made it easier for workers to unionize and increased penalties on companies that punished workers for seeking to unionize. But many labor leaders remain upset that he didn’t do more to secure the bill’s passage while Senate Democrats enjoyed a filibuster-proof 60-vote majority. In his second term, Mr. Obama championed the Trans-Pacific Partnership, a 12-nation trade pact that unions feared would create another exodus of factory jobs if Congress approved it.

Mr. Biden is clearly aligning himself with unions far more than his old White House partner did. And he may find the key to success is to tacitly reach back to the New Deal. Even then, the country can expect some tensions and letdowns. “F.D.R. did the most for the union movement of any president,” said Joseph McCartin, a labor historian at Georgetown. Still, at times his administration deeply disappointed labor.

While Roosevelt often pursued the interests of big business, he greatly expanded workers’ rights even as he fought to overcome the Great Depression by signing the National Labor Relations Act, which gave private-sector workers a federally protected right to unionize.

Presidents Harry Truman, John Kennedy and Lyndon Johnson had similarly positive but complex relationships with unions. But none of them felt the need to give robust pro-labor speeches like Mr. Biden’s, partly because unions were much bigger and stronger back then and because many union members of that era were doing just fine.

Today, unions are far weaker than in the 1950s and ’60s. Millions of workers are struggling after four decades of wage stagnation and increasing income inequality, fueled in part by corporate America’s focus on maximizing profits. Today, just one in 16 workers in the private sector are in unions, down from nearly one in three when Kennedy took office.

Mr. Biden, who has played up his “Scranton Joe” persona, knows this and sees that labor could use a boost. He also recognizes that lifting America’s workers could help woo blue-collar voters away from Trump Republicans.

There are many pro-labor things Mr. Biden can do even without Congress. If he wants to definitively make himself the most pro-union president we’ve ever seen, he could issue an executive order that bars awarding of federal contracts to companies that, like Amazon, fight against unionization. He can appoint N.L.R.B. members who would make it far harder for Uber and other companies to declare their workers independent contractors, who are not allowed to unionize.

He can ensure, as he has promised, that his $2 trillion-plus infrastructure plan creates hundreds of thousands of “good-paying union jobs.” But including that, in itself, won’t ensure Senate passage. Most pro-labor legislation will face a Republican filibuster: paid sick days, paid family and medical leave, a $15 minimum wage and the PRO Act. But a robust flurry of executive actions is still a poor substitute for broader changes approved by Congress.

Indeed, whether Mr. Biden becomes “the most pro-union president you’ve ever seen,” as he has proclaimed, could turn on whether he and Senate Democrats eliminate the filibuster.

Professor McCartin told me he hopes there will be such a groundswell of public support for Mr. Biden’s pro-worker proposals that enough Republican senators will fold. But he admits that may well be wishful thinking: “I don’t see there being significant pro-labor legislation as long as the filibuster remains.”

Steven Greenhouse was a New York Times reporter for 31 years, including 19 years covering labor and the workplace. He is the author of “Beaten Down, Worked Up: The Past, Present, and Future of American Labor.”

Opinion | Can You Believe This Is Happening in America?

Opinion | The Shrinking of the American Mind