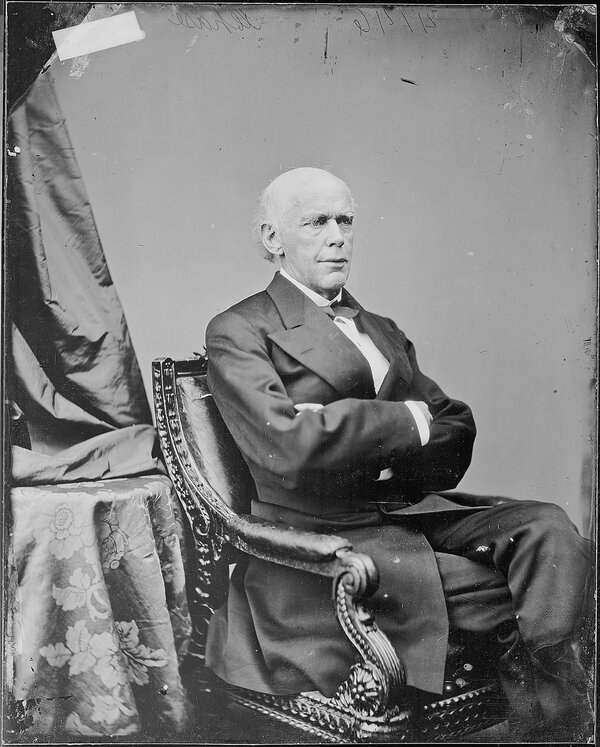 This week, I finished reading Walter Stahr’s recent biography of Salmon P. Chase, the Ohio politician and statesman who helped shape American politics in the middle of the 19th century as much as any single man. In particular, Chase stood as one of the exemplars of what has come to be called political antislavery, otherwise known as the effort to end or restrict slavery through mainstream politics rather than social reform or moral suasion.

Here, it’s worth making a brief (and somewhat simplified) explanation of the contours of antislavery beliefs. Today, Americans tend to use “abolition” and “abolitionism” as synonyms for “antislavery.” But there was, in actuality, a spectrum of views on slavery and its place within the political economy of the antebellum United States.

There were those who, as the historian James McPherson wrote in “The Struggle for Equality: Abolitionists and the Negro in the Civil War and Reconstruction,” “agitated for immediate, unconditional, and universal abolition of slavery in the United States.” These were the actual abolitionists, and among them there were at least three divisions: the followers of William Lloyd Garrison and his American Anti-Slavery Society; the radical antislavery agitators who broke with Garrison on matters of tactics or belief, like Frederick Douglass; and the abolitionists who chose not to join any formal organization.

Next to them, on the spectrum of antislavery belief, were mainstream antislavery politicians. “Unlike abolitionists,” the historian Stanley Harrold notes in “American Abolitionism: Its Direct Political Impact from Colonial Times Into Reconstruction,” “most antislavery politicians, including those associated with the Federalist, Whig, Free Soil, and Republican Parties, rarely advocated general emancipation throughout the United States or black rights.”

These politicians were often indifferent toward, and even openly hostile to, the enslaved. Many associated Black Americans with servitude and sought to exclude them from new territories and states. Their opposition to slavery had more to do with the effects of slavery on the status of ordinary white farmers and laborers — and resentment of the enormous and disproportionate power of Southern slaveholders — than concern for the lives and livelihoods of Black Americans.

On the other side of the divide were those who tolerated slavery as an inextricable part of American society, those allied with slaveholders in service of particular political goals, those who were engaged in the slave economy but saw it as immoral (at least in the abstract) and those who embraced slavery as a “positive good” (in the words of John C. Calhoun) and a necessary foundation for a free white society.

Chase, who came to the antislavery movement as a young Cincinnati lawyer defending fugitive slaves in the 1830s and early 1840s, believed that slavery had to end. He was also, perhaps as a result of his close contact with former slaves and free Blacks in Ohio, more egalitarian than most men of his class and station. As governor of Ohio, he supported education for Black Americans, and as Treasury secretary under Abraham Lincoln, he urged the president to support Black suffrage.

If I had to place Chase on the spectrum of antislavery belief and practice, I’d put him somewhere between Douglass and Chase’s political peers in mainstream antislavery politics. Chase viewed slavery as “an influence perverting our government in its true scope and end, as an institution strictly local, but now escaped from its proper limits and threatening to overshadow and nullify whatever is most valuable in our political system.”

He was a staunch pragmatist. Upon joining the antislavery Liberty Party — which had evolved out of the New England Anti-Slavery Society — Chase tried to shift its focus away from agitation and toward persuading potentially sympathetic Whigs and Democrats. “Chase,” writes Stahr, “wanted to distinguish the Liberty Party, a political party, from abolitionism, a moral movement.” He also hoped to “extend the party into border slave states such as Kentucky” and to recruit a presidential candidate who could “attract more than just abolitionists.”

Chase’s resolute (but again pragmatic) opposition to slavery would lead him to support the Free Soil Party in the 1848 presidential election; to try to organize antislavery Democrats in Ohio; to oppose the Fugitive Slave Act in Congress; and to become a founding figure in, and strong partisan of, the Republican Party. He was a rival to Lincoln in the 1860 presidential election and was — while serving as chief justice of the United States — a rival to Ulysses S. Grant in the 1868 contest for the Republican presidential nomination. He was seen, at the end of his life, as one of the nation’s great statesmen, so much so that even Democrats considered nominating him for president.

What I find so interesting about Chase is that, as progressive as he was, he was also bound to many of the dogmas of his age. His opposition to slavery and support for Black civil rights (as well as his support, later in life, for women’s suffrage) sat hand in hand with his support for “sound money” (meaning the gold standard) and minimal government. His ambitions for the former slave states — a society of free men and free labor without racial distinctions — were in tension with his Jeffersonian skepticism of bureaucratic centralization and his opposition to military reconstruction in the South.

Even as violence mounted against the formerly enslaved, Chase was confident in the white South’s ability to reconcile itself to the collapse of its racial hierarchy. And he was so devoted to the Union that he favored pardons for and reconciliation with Confederate leaders like Jefferson Davis. The combination of idealism and pragmatism that served him well in the struggle against slavery left him blind to the backlash that would follow the war and continue through Reconstruction.

Which is to say that Chase was an exemplar in more than one way. He was also an almost paradigmatic bourgeois liberal reformer (even revolutionary), who could conceive of the radical expansion of political liberty but whose vision failed him when it came to more robust forms of equality. (This is a problem that still shapes American political life.)

His limitations were, in many ways, the limitations of all the Radical Republicans who sought to remake the United States after the Civil War. Many Americans today will say that if the United States had done Reconstruction right, we could have avoided many of the problems, struggles and heartaches that followed the end of Reconstruction. I don’t know if I agree. But I will suggest this: The failure of Reconstruction was at once the product of external forces — both political opposition and ferocious counterrevolutionary violence — and its own internal contradictions.

To secure the equal status of Black Americans in the South, Reconstruction needed both a powerful national state and an ideology that could support and justify the use of that state on behalf of the formerly enslaved. The former simply didn’t exist, and what I think Chase demonstrates is that even the most perceptive and farseeing politicians of the era struggled with the latter. The question to ask yourself isn’t what would have happened had Reconstruction been effective, but whether it was even possible for it to have been effective.

My Tuesday column was on the coalition of Republican election deniers who are on the verge of winning seats in key 2024 swing states:

The problem for election-denying candidates is that ordinarily the process is too straightforward and the results are too clear. Confusion sows doubt, and doubt gives these Republicans the pretext they need to claim fraud and seize control of the allocation of electoral votes.

My Friday column was on a 19th century effort to limit judicial review and restrain the Supreme Court, and what we can learn from the attempt:

Despite some of the more interesting ideas that came out of President Biden’s court reform commission, there is no chance at this time for serious court reform. There is no consensus for it within the Democratic Party, and there are certainly not the votes for it in Congress. But circumstances do change, often unexpectedly. Should progressives gain the opportunity to make structural changes to the Supreme Court, they should take it.

Jack McCordick on some of our professional “free speech” warriors in The New Republic.

Samir Sonti and JW Mason on the political economy of inflation for Phenomenal World.

Harold Meyerson on the history behind the racism on the Los Angeles City Council in The American Prospect.

Mickey Edwards on our election system for American Purpose. (I actually disagree with this one quite a bit and may write about that disagreement in the future.)

Radhika Desai on the Federal Reserve for New Left Review.

Feedback If you’re enjoying what you’re reading, please consider recommending it to your friends. They can sign up here. If you want to share your thoughts on an item in this week’s newsletter or on the newsletter in general, please email me at jamelle-newsletter@nytimes.com. You can follow me on Twitter (@jbouie), Instagram and TikTok.

Photo of the Week

I was in Richmond, Va., recently, and we took a long stroll through Hollywood Cemetery, home to two presidential gravesites, the tomb of Jefferson Davis and this pyramid, built in 1868 and dedicated in 1869 as a memorial to the 18,000 Confederate war dead buried nearby. I took a few photos with a proper camera but I haven’t developed the film yet, so please enjoy this picture for now, taken with my iPhone.

This recipe is from the BraveTart cookbook, which is a great compendium of traditional American sweets and desserts. These are also easy to throw together. My advice? Take seriously the direction to use different kinds of chocolate bars. This batch, for example, has white chocolate, semisweet chocolate and bittersweet chocolate. And don’t skimp on the chocolate! It’s the whole point.

2 teaspoons (8g) Diamond Crystal kosher salt, plus more for sprinkling; for table salt, use about half as much by volume or the same weight

Adjust oven rack to middle position and preheat to 350°F (180°C). Set aside a handful of chopped chocolate (about 2 ounces; 55g) and place the remainder in a medium bowl. Sift flour on top and toss together. Combine butter, white sugar, brown sugar, vanilla, salt, baking soda, baking powder, and nutmeg in the bowl of a stand mixer fitted with a paddle attachment. Mix on low to moisten, then increase to medium and beat until light and fluffy, about 5 minutes. With mixer running, add egg and continue beating only until smooth. Reduce speed to low, add flour/chocolate all at once, and mix to form a stiff dough.

Divide in 2-tablespoon portions (about 1½ ounces or 40g each) and round each one into a smooth ball. (If you like, portioned dough can be refrigerated in a heavy-duty zipper-lock bag up to 1 week, or frozen 6 months. Stand at room temperature until quite soft, about 70°F or 21°C, and proceed as directed.)

Arrange portions on a parchment-lined half-sheet pan, leaving 2 inches between cookies to account for spread. Garnish each with reserved chocolate and a tiny pinch of kosher salt. You’ll need to press down on the cookies to do this (don’t worry if salt or chocolate falls on the baking sheet). Bake until puffed and pale gold around the edges but steamy in the middle, about 15 minutes. For crunchy cookies, continue baking until golden, 3 to 5 minutes more. Cool directly on baking sheet until crumb is set, about 5 minutes. Enjoy warm or store in an airtight container up to 2 days at room temperature.

Opinion | What Biden and F.D.R. May End Up Having in Common

How China's deal with the US helped avert COP26's collapse