Those of us who can’t tolerate the thought of another four years of this administration are extremely grateful to Michael Bloomberg for his commitment to spend at least $100 million, primarily on television and digital ads, to increase voter turnout in Florida.

But an even more politically effective, and charitable, use of those dollars might be to help pay off the debts of Floridians who have financial obligations related to a felony conviction — as LeBron James and the group behind More Than a Vote did this summer. Because of an 11th Circuit appeals court ruling on Sept. 11, an estimated 774,000 Floridians who have already served their time in jail or prison are not eligible to vote in the 2020 election until they pay the fines and fees associated with their sentences.

The ACLU and others have argued that the fines and fees are unconstitutional in the first place; after all, the Supreme Court’s 1983 decision in Bearden v. Georgia requires courts to assess a defendant’s ability to pay before charging unaffordable penalties. But without some sort of intervention, the impact of the recent appeals court decision could easily cost Democrats the election. 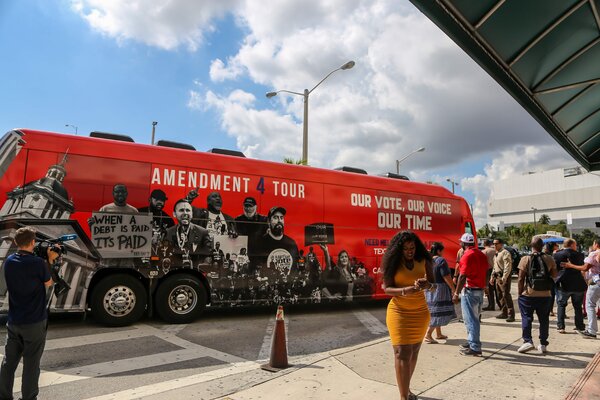 In 2018, led by Desmond Meade and the Florida Rights Restoration Coalition, Floridians passed Amendment 4 to the Florida Constitution, giving more than 1 million people who were convicted in Florida of felonies other than murder or sex offenses the right to vote after they’ve completed all the terms of their sentence.

The recent appellate court decision effectively rescinded this right in Florida. In a cynical 6-4 ruling (five of the six judges supporting the verdict were appointed by President Trump), the 11th Circuit said that the exorbitant financial penalties tacked on to individuals’ prison terms were “part of the debt to society that felons must pay for their crimes” before voting rights could be restored. As the ACLU argued, this requirement is similar to the kind of poll tax that the 24th Amendment outlawed in 1964.

Be that as it may, Florida’s voter registration deadline of Oct. 5 is quickly approaching, and Joe Biden and Kamala Harris have a much clearer road to victory with Florida’s electoral votes than without them. So instead of spending money on ads, as he plans to, according to The Washington Post, Mr. Bloomberg might seriously consider reallocating the money he has earmarked for Florida to pay off the debts of formerly incarcerated people who have completed their prison terms.

According to The Sun-Sentinel, former felons in Florida owe more than half a billion dollars in fines in Broward County alone, and once Palm Beach and Miami-Dade Counties are included, that total debt surpasses $1 billion. The Florida Rights Restoration Coalition and other groups have started modest ad hoc funds, but the scale of those is dwarfed by Mr. Bloomberg’s $100 million pledge. If Mr. Bloomberg starts by paying off the debts of those who owe the least, that amount should release considerably more than 10 percent of the hundreds of thousands of people disenfranchised by the 11th Circuit ruling.

This could easily make all the difference in Florida’s election in November — and allow tens of thousands of fellow Americans, who have already paid their debts to society with their personal liberty, to start anew.

Robert Montoye is a computer scientist.

Amid growing uncertainty, PLA to step up pace of revamp

Opinion | This Is No Way to Run a Democracy