Within the first five minutes of Barry Jenkins’s Amazon series, “The Underground Railroad,” there is a scene that struck me so powerfully that I had to pull my copy of Colson Whitehead’s Pulitzer Prize-winning novel, which the series is based upon, from the shelf. The scene didn’t show the kind of brutality I have come to expect from “slave movies.” It is, instead, a moment of startling banality:

The story’s enslaved protagonist Cora (Thuso Mbedu) and a newcomer to the plantation, Caesar (Aaron Pierre), are circling one another around a tree, caught in a golden stream of sunshine, in what appears to be a courting dance. For several beats there are no words, only the dance of unspoken agendas. When Cora asks Caesar the purpose of their meeting, he proposes that she escape with him — not because of his love for her, but for good luck. She thinks it a joke, then turns hot upon realizing that it is not, telling him that she “ain’t nobody’s good luck.” She starts to say something else, but stops, then stomps off. In the novel, the dialogue is close, but not quite. Mr. Whitehead ends the conversation without any adornment — the negotiation is over almost before it has begun. In Ms. Mbedu’s portrayal, however, there are a hundred stories in what she does and does not say, all of them likely horrific. She does not have to speak aloud the dangers of overseers or slave patrollers. She says it all in the stilled tongue, in the pursed lip.

In that moment it became strikingly clear that I was not going to be subjected to the finger-wagging of previous attempts to teach the horrors of slavery to mainstream audiences. Cora is not merely an avatar for enslaved people in that moment. She is a person, complete with emotional range and interiority, and even agency. And “The Underground Railroad” is a rare treatment of the subject that feels made to weigh the experience of Black people, while also being a necessary altar call for white people.

Watching Mr. Jenkins’s 10-part mini-series on Amazon was not a passive experience for me. The work asks several questions that only Black people can answer: If we simply stayed on the metaphorical, magic-realist train that guides Mr. Whitehead’s book and the Amazon show’s narrative, riding it further and further away from the slavery of the South, would it ever actually take us to freedom? Can someone who isn’t white ever truly be free in America? Can anything ever really change? 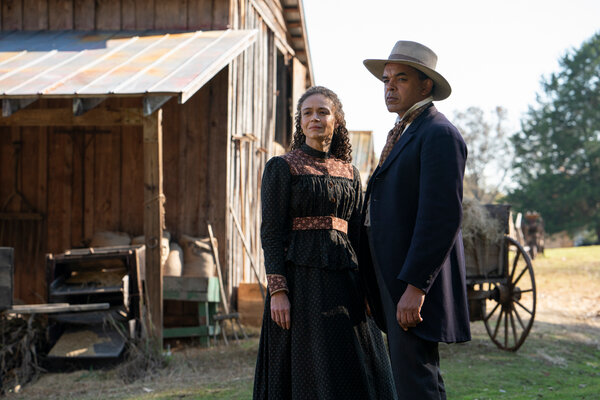 Slavery, as a narrative engine in Hollywood, tends to be seen through the white gaze, and comes loaded with obvious moral lessons and simple characterizations of good and evil, cut cleanly along racial lines. This arguably serves an educational purpose, as the history of America’s unforgivable original sin is taught very little and very badly in America’s classrooms. A Houston textbook, for example, referred to the Trans-Atlantic Slave Trade as a pattern of immigration, and described the Africans stolen and sold in America as “workers” … and it was still in classrooms in 2015. The country currently sits in a moment when legislation in several states seeks to restrict school curriculums that include critical race theory and America’s history of slavery (including those built around The New York Times’s 1619 project).

So art — the dutiful soldier of public discourse on difficult subjects — is doing a lot of educational heavy lifting, leaving us with a cinema focused in large part on making sure that audiences learn the essential lessons: that slavery happened, that it was as bad as you’ve heard and that its effects linger in American life.

This is a well-intentioned effort. But it is not enough to say that slavery was bad. We must contend with the intellectual and moral arguments that made it possible to conceive, then implement, the system. “The Underground Railroad” — through its fully realized Black characters and exploration of the range of Black political thought — does something exceedingly rare: It forces every kind of American to reckon with how we have tried to resolve slavery, individually and as a country. All of this inequality we continue to see comes from somewhere.

“The Underground Railroad” is not less traumatic than other fare, showing brutality to rival that of “Antebellum” and “12 Years a Slave.” But in Mr. Jenkins’s adaptation, there is no violence for education’s sake, and no fetishizing of Black trauma. The violence arrives only when necessary for the development of the story, and it isn’t gone in the next scene — the characters bear its scars, seen and unseen.

Mr. Jenkins’s series, like the book it is based upon, is a lot of things at once — journey tale, historical touchstone, matriarchal reckoning — but what both works do better than perhaps any film or show dealing with slavery to date is interrogate the very real relationships Black people have proposed, agreed to and attempted to realize with America itself. Nearly every episode presents us with a new, pointed, difficult question. Here, it proposes at the outset, you tried running from slavery. How’d that work out? Then, when Cora and Caesar make their way to the town of Griffin, where slavery is outlawed but scientific experimentation is the order of the day, it asks, Here’s integration and exceptionalism. How’d that work out? Then, when Cora arrives at the idyllic Valentine farm, which has negotiated away its independence and economic leverage to a nearby white town to keep the peace, the show asks, Here’s separation and capitalism. How’d that work out? Such interrogation is a necessary, if painful, step toward whatever we mean by doing “the work” of antiracism.

The genius of Mr. Whitehead’s novel lies in how he reimagines the various relationships America maintains with Black people in education, labor, religion, policing and protest — all through the literary lens of magical realism. Mr. Jenkins’s direction transforms those allegories into observations that don’t seem very far-fetched at all. In doing so, he manages to shrink the distance between the history we labor to forget and a reality in which Black people still find themselves carried along a vicious school-to-prison pipeline, trapped in systemic inequality and tyrannized by over-policing that smacks of overseer roots.

This series is not a curriculum, but a reappraisal, and as a viewer, it cuts deeper than any history lesson could. Ultimately the series stands as a reminder of the vast catalog of things we can never know about slavery. We can never know all of the stories or real names or where all of the bodies were left behind, buried or not.

A show can’t fix that, but the alchemy of great cinema can create a kind of communion, as Mr. Jenkins has described: Looking at the show’s background actors in costume, he wrote, was like “looking at my ancestors, a group of people whose images have been largely lost to the historical record.” Mr. Jenkins released a powerful 52-minute wordless video of those actors in costume, “The Gaze,” scored by the show’s composer, Nicholas Britell, a few days before the release of “The Underground Railroad.” In it, the viewer is regarded by actor after actor silently representing the “Black gaze,” or as Mr. Jenkins puts it, “the gaze distilled.”

“This is an act of seeing,” Mr. Jenkins wrote in a note accompanying “The Gaze.” “Of seeing them. And maybe, in a softheaded way, of opening a portal where THEY may see US, the benefactors of their efforts, of the lives they LIVED.”

This kind of seeing — those unblinking gazes between the ancestors and descendants of the enslaved, and those with privilege and power — is something we must learn to do as a country if we are to ever fill a hole in our soul the size of slavery.

Scott Woods (@scottwoodssays) is a writer and poet in Columbus, Ohio. He is the author of a collection of essays, “Prince and Little Weird Black Boy Gods.”

COMMENTARY: How sewage testing can flush out the presence of COVID-19