The announcement this week from the Canadian company TC Energy that it was pulling the plug on the Keystone XL pipeline project was greeted with jubilation by Indigenous groups, farmers and ranchers, climate scientists and other activists who have spent the last decade fighting its construction.

The question now is whether it will be a one-off victory or a template for action going forward — as it must, if we’re serious about either climate change or human rights. The next big challenge looms in northern Minnesota, where the Biden administration must soon decide about the Line 3 pipeline being built by the Canadian energy company Enbridge Inc. to replace and expand an aging pipeline.

It’s easy to forget now how unlikely the Keystone fight really was. Indigenous activists and Midwest ranchers along the pipeline route kicked off the opposition. When it went national, 10 years ago this summer, with mass arrests outside the White House, pundits scoffed. More than 90 percent of Capitol Hill “insiders” polled by The National Journal said the company would get its permit.

But the more than 1,200 people who were arrested in that protest helped galvanize a nationwide — even worldwide — movement that placed President Barack Obama under unrelenting pressure. Within a few months he’d paused the approval process, and in 2015 he killed the pipeline, deciding that it didn’t meet his climate test.

“America’s now a global leader when it comes to taking serious action to fight climate change,” Mr. Obama said. “And frankly, approving this project would have undercut that global leadership. And that’s the biggest risk we face — not acting.”

And that’s what puts the Biden administration in an impossible place now. Enbridge wants to replace Line 3, which runs from Canada’s tar sands deposits in Alberta across Minnesota to Superior, Wis., with a pipeline that follows a new route and would carry twice as much crude. It would carry almost as much of the same heavy crude oil as planned for the Keystone XL pipeline — crude that is among the most carbon-heavy petroleum on the planet.

If Keystone failed the climate test, how could Line 3, with an initial capacity of 760,000 barrels a day, possibly pass? It’s as if the oil industry turned in an essay, got a failing grade, ignored every comment and then turned in the same essay again — except this time it was in ninth grade, not fourth. It’s not like the climate crisis has somehow improved since 2015 — it’s obviously gotten far worse. At this point, approving Line 3 would be absurd. 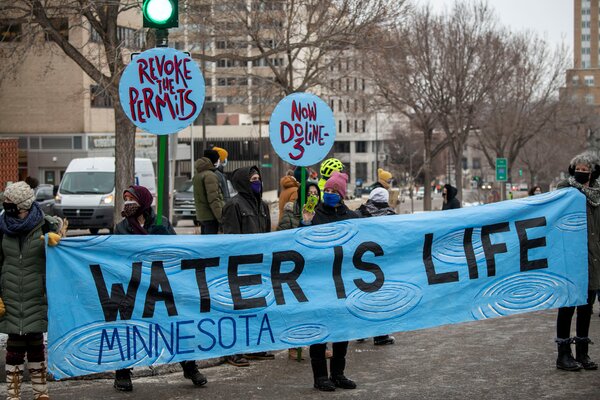 The Keystone announcement is no doubt buoying the spirits of the protesters, led by Indigenous campaigners who are currently occupying the headwaters of the Mississippi River where the Line 3 pipeline must go. They’ve pitched tents along a quarter-mile of wooden boardwalk that the pipeline company built to get its drilling rig to the bank of the river, and now there are prayers and ceremonies underway.

The authorities could try to roust them out — earlier in the week, a U.S. Customs and Border Protection helicopter hovered above a group of protesters, throwing up a huge cloud of dust, an action that the federal government says is now under investigation. But it’s not just the climate that’s changed in the last few years; it’s also the political climate. In an era when officials talk constantly about coming to terms with the dark parts of American history, I doubt Mr. Biden actually wants to sic the cops on Native elders as they sit at the headwaters of one of America’s most storied rivers, on land that, as Native leaders are pointing out, by treaty should fall under Native control.

Instead, the administration should pause construction on Line 3 and re-examine the river-crossing permits granted by the Army Corps of Engineers. The Department of Justice should stop trying to uphold the last administration’s decisions, which were made by people who thought climate change was a hoax. And the Biden administration should issue standards to make sure that new fossil fuel infrastructure has to pass a climate test — a test that takes into account America’s theoretical commitment to the Paris accords.

That pact commits us to trying to hold the planet’s temperature increase to as close to 2.7 degrees Fahrenheit as possible. Climate scientists say emissions must fall 45 percent this decade to meet that goal. That’s why the International Energy Agency said last month that new fossil fuel investment must end this year. But the Biden administration also has to take a hard look at any new infrastructure, from liquefied natural gas export terminals on the Oregon coast to gas compressor stations in suburban Boston.

The headwaters of the Mississippi are also, at least for now, the place where Mr. Biden’s climate commitment will be judged. Yes, Republicans will attack him if he blocks the pipeline, and so will some of the unions whose workers are likely to fill many of the 8,600 jobs that Enbridge says would be created over a two-year period. But the polls make clear that the people who elected Mr. Biden expect action on the climate. He can’t go backward; the climate test of 2015 means that Line 3 in 2021 is an anachronism that must be blocked.

What we’ll find out next is whether Keystone lives up to its name — whether, with its demise, much of the rest of the elaborate architecture of fossil fuel expansion begins to topple. If so, then it will have been a victory not just for a decade but also for the ages.

Bill McKibben, a founder of the climate advocacy group 350.org, teaches environmental studies at Middlebury College and is the author of “Falter: Has the Human Game Begun to Play Itself Out?”