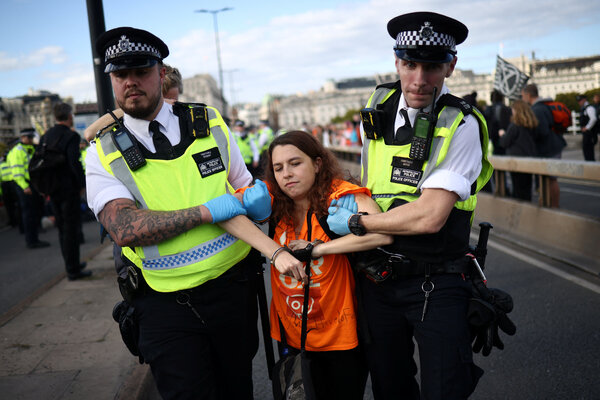 On Friday morning two young women approached Vincent van Gogh’s “Sunflowers,” on display in the National Gallery in London, and hurled tomato soup across the blooms, before gluing themselves to the gallery wall.

The two activists were part of a climate-protest outfit with an illuminating name: Just Stop Oil. Celebrating their vandalism, the group declared that the “disruption is in response to the government’s inaction on both the cost of living crisis and the climate crisis,” and that it was deliberately timed to protest both the “launch of a new round of oil and gas licensing” and “an energy price hike” that threatens to throw “almost 8 million households” into “fuel poverty.”

It’s a mistake to demand perfect consistency from activists, but if you read the preceding paragraph carefully you will note a certain tension. The activists are protesting both the expansion of energy supply, on the grounds that fossil fuels are pushing the world toward climate apocalypse, and the energy supply’s constriction, on the grounds that higher prices are cruel to struggling households.

This tension has always lurked beneath the surface of left-wing climate activism, whose vision often imagines rich societies accepting a certain austerity, a retreat from the growth mentality of capitalism, a simpler, more ecologically wholesome way of life … while also imagining that somehow this austerity will fall only on the greedy rich and consumerist upper middle class, while the poor and working class experience the post-capitalist, de-growth future as more affordable, not less.

But in the energy crisis of 2022, this tension is no longer merely theoretical, an obvious crack running through a crystalline utopia. Thanks to Vladimir Putin’s war and its attendant shocks, we are getting a version of the just-stop-oil world: immediate unavailability of normal flows of energy, forced transitions to alternative fuels, a price on oil and gas that’s closer to what the most aggressive advocates of energy taxes would argue is appropriate, given global warming’s threat.

This reality has been acknowledged widely, but in a tone of optimism, with various European authorities and experts casting the crisis as a green-energy opportunity, the push that the continent needs to further decarbonize itself. (The made-for-Twitter placement of Putin atop Politico Europe’s Green 28 rankings is a puckish example of this mind-set.)

But the incommensurate demands of the van Gogh vandals are a better guide to the new reality than the green-future optimism of officialdom. Yes, the world has made great progress on alternative energy, which is one reason climate change’s existential risks have dropped meaningfully in recent years, with worst-case scenarios becoming much less likely than before.

This progress, though, has only been possible without declining living standards because of the continued extraction of oil and gas, the reliable foundation on which the more variable benefits of wind and solar rest. And to the extent that Western leaders have pushed further in the just-stop-oil direction, by limiting drilling or fracking or pipeline construction, they have made their societies more vulnerable to exactly the kind of shock that has now arrived.

The result is likely to be an object lesson in why just-stop-oil is a disastrous answer to the problem of a warming world. It’s not just that instead of a harmonious eco-future we’re likely to get a poorer Europe burning more coal and wood and suffering further populist disturbances. It’s also that when higher energy prices fall hard on citizens of a wealthy country like Britain, they fall even harder on the world’s developing economies, which in time of shortages will be simply outbid for energy.

If unaffordable energy destabilizes Western politics, in other words, we should expect even more destabilization in blackout-beset nations like Bangladesh and Pakistan, which are currently struggling to afford the rising price of liquefied natural gas.

This reality distills the whole challenge of climate change mitigation. As activists point out, the dangers of rising temperatures are unevenly distributed, with parts of the developing world facing the starkest environmental threats.

But the dangers of an economic slowdown, an age of green austerity, are also unevenly distributed, and the African and Asian countries playing catch-up have much more to lose, relative to developed economies, from a future that’s safer from floods and heat waves but much poorer than it otherwise might be.

Similarly, Europe, more economically stagnant than the United States and more maxed-out on oil-and-gas restrictions, has more to lose than we do from the greener, poorer, colder world that Putin’s war has ushered in.

For a long time those of who are lukewarm about the climate-change debate — accepting the reality of warming, but doubting the sweeping policies proposed in response — have had to reckon with a reasonable question: What’s the harm of a little overreaction in the face of such grave long-term risk?

In 2022, though, the answer is that those harms are here and their costs are ready to be paid upfront — paid by poorer people and poorer countries, especially, but by all of us for as long as the just-stop-oil movement gets a version of its wish.

Opinion | Apps Are Helping to Gut the Restaurant Industry