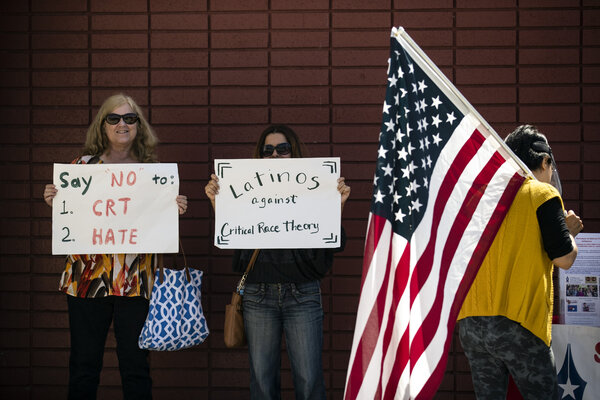 Re “Support for Teachings on Race” (Arts pages, June 17):

The debate surrounding critical race theory for young students has left me asking, “Too much or not enough?”

Reading the children’s book “Empathy Is Your Super Power” with my 6-year-old granddaughters, I wondered how they would integrate its message to think about how the other person feels, when within a few short years they will encounter a history curriculum sufficiently explicit regarding the evils their nation committed against Native American and Black people. Of course they should learn what happened, without sugar coating. But what do they do with that information after an early childhood of exhortations to be nice, to care about and be kind to others?

Helping them to see that they themselves have developed biases against differently colored or categorized people may be a worthy objective. But the problem is when it ends there. They need to ask, what went wrong and why? Could it happen again?

Some teachers find time to engage students in such discussions, but most are fearful of getting into “politics,” as off-limits as religion. In their absence, the history lessons can leave children with unanswered questions: Is there something bad about me? How did I get my biases? And how can we do better?

Let’s get tomorrow’s citizens talking from an early age about what a better society would look like and how to build it.

Deanna Kuhn
Bronxville, N.Y.
The writer is a professor at Teachers College, Columbia University, and the author of the book for young teens “Building Our Best Future: Thinking Critically About Ourselves and Our World.”

Some years ago I asked my middle-school students why they thought their parents didn’t want them to watch pornography. “That’s easy,” a boy said, to heads nodding all around. “They just don’t want us to know about real sex.”

I pointed out that once you put a camera in the room, it’s no longer “real,” right? It’s a performance, for the purpose of someone else’s enjoyment and to line someone else’s pockets. That made good sense to them. And that’s why we don’t have the luxury of waiting until they’re older.

I’ve been a sexuality educator for decades, but when people who don’t know that ask me what I teach I very often say: “Critical thinking skills. Isn’t that what all teachers teach?” Why is that idea controversial only when it comes to learning about sexuality?

As for the worry that learning about sexuality will cost children their “innocence,” we need to carefully rethink that as well. Children lose their innocence when they discover that the people they love and count on won’t always be there in the future. Abdicating our roles around children’s need to make their way healthfully and joyfully in the world as sexual people teaches them that we’re not there for them now.

Deborah M. Roffman
Baltimore
The writer is the author of “Talk to Me First: Everything You Need to Know to Become Your Kids’ ‘Go-To Person’ About Sex.”

The View From Enbridge: Don’t Close the Pipeline

Critics like Mr. McKibben equate Line 3 and the Keystone XL pipeline, yet the projects are very different. Keystone XL was a new pipeline. Line 3 replaces an aging, corroding pipeline that has been operating since 1968 and is an energy source that consumers, manufacturers and the U.S. economy already depend on. Closing this pipeline would have repercussions not unlike what we saw with the Colonial pipeline cyberattack.

The Line 3 replacement is the most studied pipeline project in Minnesota history with more than 70 public hearings, 13,500 pages of environmental impact statements, four separate reviews by administrative law judges and 320 route modifications in response to stakeholder input.

On June 14, the Minnesota Court of Appeals, in concluding its review of the Minnesota Public Utility Commission’s permitting for the project, wrote: “Finally, the commission reasonably selected a route for the replacement pipeline based upon respect for tribal sovereignty, while minimizing environmental impacts.”

President Biden has called on us to “build back better.” That’s exactly what Line 3 is all about.

As a lifelong Democrat, I certainly disagree with Representative Liz Cheney on virtually all political issues. But as a social psychologist and a mother of three, I could not agree with her more about the need to be “able to tell your kids that you stood up and did the right thing.”

This type of modeling helps explain who undertakes acts of moral courage during times of violence and civic unrest. Many of the civil rights activists who participated in marches and sit-ins in the Southern United States in the 1960s had parents who displayed moral courage and civic engagement, as did many of the Germans who rescued Jews during the Holocaust.

A study by sociologists found that one of the strongest predictors of who helped refugees during the 1994 genocidal massacres in Rwanda was having parents or grandparents who had done so during previous episodes of violence in their country.

Watching people we look up to — parents, teachers and other role models — show moral courage can clearly inspire us to do the same, and thus Ms. Cheney’s choice may well help inspire future courageous actions in her children, if not in her Republican colleagues.

Catherine A. Sanderson
Hadley, Mass.
The writer is chair of the psychology department at Amherst College and the author of “Why We Act: Turning Bystanders Into Moral Rebels.”

The Statue of Liberty: The Chinese Version

Re “France Is Sending the U.S. a Smaller Statue of Liberty” (news article, June 13): There have been many copies of the Statue of Liberty, but China’s version, the Goddess of Democracy, was unique.

Chinese pro-democracy student activists built a copy of the Statue of Liberty when they occupied Tiananmen Square in 1989. The so-called supreme commander of the student movement, whom I helped bring to the United States, explained an important difference between the original and the Chinese version.

The Goddess of Democracy was toppled when Chinese troops entered Tiananmen Square in June 1989. When it collapsed, so did China’s pro-democracy movement.

David L. Phillips
New York
The writer is director of the Program on Peace-Building and Human Rights at Columbia University.

Everything in moderation, including (online) moderation