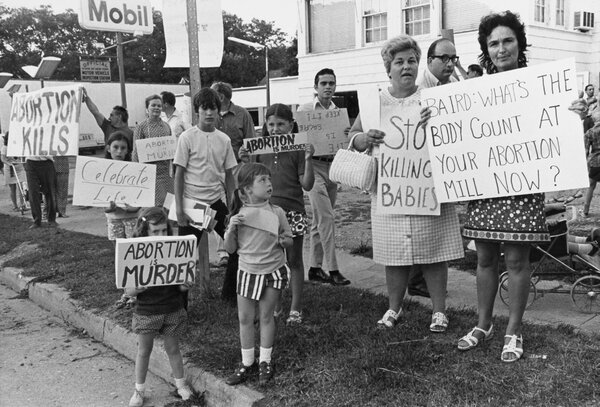 By Gail Collins and Bret Stephens

Ms. Collins and Mr. Stephens are opinion columnists. They converse every week.

Bret Stephens: Hi, Gail. I don’t know if you remember the Lloyd Bridges character from the movie “Airplane,” the guy who keeps saying, “Looks like I picked the wrong week to quit smoking/drinking/amphetamines/sniffing glue.” We were away last week and … stuff happened. Your thoughts on what appears to be the imminent demise of Roe v. Wade?

Gail Collins: Well, Bret, I have multitudinous thoughts, some of them philosophical and derived from my Catholic upbringing. Although I certainly don’t agree with it, I understand the philosophical conviction that life begins at conception.

Bret: As a Jew, I believe that life begins when the kids move out of the house.

Gail: But I find it totally shocking that people want to impose that conviction on the Americans who believe otherwise — while simultaneously refusing to help underprivileged young women obtain birth control.

Gail: So we have a Supreme Court that’s imposing the religious beliefs of one segment of the country on everybody else. Which is deeply, deeply unconstitutional.

You agree with that part, right?

I’ve always thought it was possible to oppose Roe v. Wade on Constitutional grounds, irrespective of religious beliefs, on the view that it was wiser to let voters rather than unelected judges decide the matter. But that was at the time the case was decided in 1973.

Right now, I think it’s appalling to overturn Roe — after it’s been the law of the land for nearly 50 years; after it’s been repeatedly affirmed by the Supreme Court; after tens of millions of American women over multiple generations have come of age with the expectation that choice is a fundamental right; after we thought the back-alley abortion was a dark chapter of bygone years; after we had come to believe that we were long past the point where it should not make a fundamental difference in the way we exercise our rights as Americans whether we live in one state or another.

Gail: If we’re going to have courts, can’t think of many things more basic for them to protect than control of your own body. But we’ve gotten to the same place, more or less. Continue.

Biden Seeks Shift in How the Nation Serves Its People