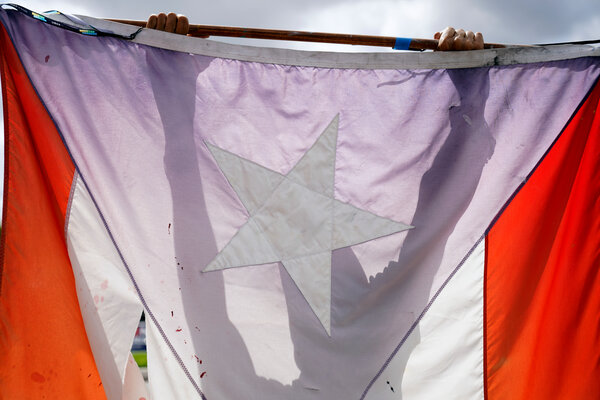 Like all Americans, the people of Puerto Rico went to the polls on Tuesday. But unlike their fellow citizens, Puerto Ricans cannot vote for the president, or for senators or representatives (except for one nonvoting “resident commissioner”). Instead, voters there were asked whether they wanted Puerto Rico to become the 51st state of the union: “yes” or “no.” They chose “yes.” With this historic vote, Puerto Ricans have staked their claim to admission as the 51st state in the Union.

A bill that was introduced in Congress in 2019 but didn’t come to a vote before the statehood referendum would have expressed Congress’s commitment to admitting Puerto Rico as a state if the “yes” vote won. Now that it has, statehood opponents will start throwing up roadblocks. Some will say that the ballot language was flawed; others that the margin of victory was not large enough. Skeptics will wonder whether the time is right, politically or economically. But these objections should not stand in the way. Congress should make Puerto Rico a state now.

The painful legacy of U.S. racial bias against Puerto Rico makes the island’s immediate admission into statehood a political and moral imperative. By stalling now, Congress would add fresh insult to old injury by confirming the suspicion that racism against Puerto Ricans is alive and well in America.

Puerto Ricans became U.S. citizens in 1917, but to this day, Congress governs Puerto Rico under the Territory Clause of the Constitution, which empowers it to make “rules and regulations” for U.S. territories. Federal laws apply there, with a few exceptions determined by Congress, yet the three million American citizens who live in Puerto Rico have no say in the making of those laws. While the island has been officially known as a “commonwealth” since the early 1950s, that label did not change its status: It remains a U.S. territory. Decrying this state of affairs, a former Chief Justice of the Supreme Court of Puerto Rico called it “the oldest colony in the world.”

Many Americans believe that Puerto Rico’s colonial status reflects some sort of deal to trade the right to federal representation for a break from federal taxes. But if this convenient rationalization of the status quo seems facile, that’s because it is. For starters, although residents of Puerto Rico do not pay federal income taxes on local income, they do contribute to the federal treasury through other taxes, such as payroll taxes. Between 1998 and 2006, Puerto Rico contributed over $4 billion annually to the federal treasury — more than six states of the Union. Moreover, Puerto Ricans already pay for their federal tax break with significantly reduced federal benefits. Besides, according to estimates from the Tax Policy Center, over 40 percent of all households in the states will not earn enough money this year to owe federal income taxes. No one expects them to give up their right to vote in return.

But the deeper problem with the “tax deal” view of Puerto Rico’s status is that the principles of American democracy forbid such a Faustian bargain. In a democracy, the right to vote is not for sale. That’s why a majority of Puerto Ricans have chosen statehood, and why Congress should admit Puerto Rico now.

Those who take issue with the ballot language will insist that instead of a “yes or no” vote on statehood, the ballot should have included other status options: an “enhanced” version of the current status (which enjoys substantial support on the island); independence (despite its extremely low popularity); and free association (read: independence, with a treaty of association with the United States). But this view ignores certain crucial realities of Puerto Rico’s status debate.

Only two of these options, statehood and “enhanced” commonwealth, have any real support: Puerto Ricans have been split down the middle between these two alternatives for half a century. And even across this divide, these two groups have long agreed on two key points: All of them wish to remain U.S. citizens, and all of them wish to maintain the island’s permanent union with the United States. Every measure of Puerto Rican preferences since the mid-twentieth century has revealed this overwhelming consensus — where “overwhelming” literally means over 90 percent. Given Puerto Ricans’ near-unanimity on the desirability of continued U.S. citizenship and a permanent union with the United States, it made perfect sense for them to have a straight-up vote on statehood, yes or no.

In its own twist on this objection, the Department of Justice produced a letter earlier this year taking issue with the omission of a different option: the current, un-enhanced territorial status. This objection is specious. For one thing, the status quo was on the ballot, insofar as it would unavoidably be the immediate consequence of a “no” vote. For another, Puerto Ricans reject being a territory. But even if they didn’t, the inclusion of a territorial status option would defeat the morally essential purpose of a vote on Puerto Rico’s future: to decolonize Puerto Rico. Continued colonial status does not belong on a decolonization ballot.

Opponents of statehood will also insist that the margin of victory was not large enough. But no other territory has ever been subjected to such a requirement — and when it comes to treating Puerto Rico differently, enough is enough. Moreover, congressional silence on statehood before the November 3 referendum inevitably depressed the “yes” vote. Although 52 percent of Puerto Ricans voted for statehood, that percentage would almost certainly have been much higher if Congress had made clear before the vote that it stood ready and eager to welcome a state of Puerto Rico. To paraphrase a well-known maxim, for the residents of a perpetual colony, it might feel better to remain silent and only suspect that your fellow American citizens view you as inferior than to ask for equality and remove all doubt. That voting for statehood required Puerto Ricans to take a leap of faith makes the “yes” vote all the more resounding.

Time’s up on pondering the political and economic consequences of Puerto Rican statehood, let alone being opposed to it. It has been 122 years. You don’t annex a place, make it your colony for nearly a century and a quarter, and then reject its people’s vote for statehood. The time for Puerto Rican statehood is now.

Christina D. Ponsa-Kraus is a professor at Columbia Law School.