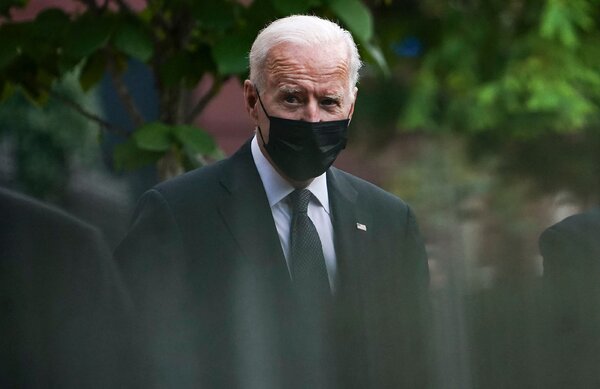 By Gail Collins and Bret Stephens

Ms. Collins and Mr. Stephens are opinion columnists. They converse every week.

Bret Stephens: Hello, Gail. I hope these last two weeks of vacation have been nicer for you than they’ve been for Joe Biden.

Gail Collins: Bret, I always feel sympathy for a president when there’s a national disaster on his watch. Well, presuming he’s a person who has the capacity to imagine other people’s pain.

But this does seem more terrible with Biden, given his long history of personal family tragedy. As you know, I don’t converse much about foreign affairs — I decided long ago to leave that area to folks who have way more knowledge than me. But feel free to share your thoughts.

Bret: I always opposed the withdrawal. Two years ago, I wrote a column calling on Mike Pompeo, when he was secretary of state, to resign for “fathering the catastrophe that may soon befall Afghanistan.” I thought we could have maintained a small and secure garrison that would have provided the Afghans with the air power, surveillance and logistics they needed to keep the Taliban from sweeping the country.

Gail: I am not conceding my no-foreign-affairs policy, but let’s just say I am feeling a tad skeptical.

Bret: Reasonable people can debate the point. What’s beyond debate is that Biden’s execution of his own policy has been a fiasco. He assured Americans in early July that there would be no Fall-of-Saigon scenes in Kabul. He abandoned the Bagram Air Base that would have provided a much more secure way of getting people out. He set an unnecessary deadline that the Taliban could hold him to. He reportedly gave the Taliban a list of American names, many of them Afghan-Americans, presumably to expedite their departures but putting them at risk of being targeted or taken hostage. He has left stranded countless Afghans who depended on America’s protection and are now terrifyingly vulnerable to reprisal. He made the United States look humiliated, incompetent and weak.

I’d call it Biden’s Bay of Pigs, but that would be unfair to Jack Kennedy, who came into office with much less foreign policy experience than Biden. And now the president can’t even seem to acknowledge his own mistakes.

Gail: That last one, I suspect, is temporary. You don’t generally get presidents coming before the public in the middle of a terrible crisis saying: “God, I screwed this up.” I predict he’ll be more reflective as time passes.

Bret: I hope so. If we had a parliamentary system, Biden would probably lose power in a no-confidence vote. As it is, I think he may have wrecked his own presidency when it’s barely begun. How does he recover?

Gail: Well, he obviously needs to pass his domestic agenda. If the Democrats can get their act together before the congressional elections, he’ll have a huge infrastructure program that will have the whole country driving across rickety bridges and crumbling overpasses with a new optimism.

New York cautiously reopens as coronavirus surges elsewhere in US