The start of an off-road motorcycle or all-terrain vehicle endurance race is like a freight train rolling through an earthquake. Open courses stretch over grass tracks, woods and streams. Spectators are unfazed as, inches away, racers fly by. There’s a lot of dirt.

When I stumbled upon a race near Ithaca, N.Y., in 2014, a rider’s mom explained how the races work — and how not to get run over. I paused when she told me what they’re called.

“Did you say this is called a hair spray?” I asked.

I started following the New York Off-Road Association circuit, camping out on fields in towns like Homer and Speedsville. The Grand National Cross Country circuit also spins through New York, and I graduated to photographing those events.

These are pastoral yet hardscrabble landscapes; the people who participate can fix an engine while cooking steak over a campfire and juggling toddlers. I spend days knee deep in mud holes and often disappear in clouds of dust. At a race along the Pennsylvania-West Virginia border, a stranger called me Pig-Pen. A veteran race photographer offered sage advice: Wait until the mud dries before scraping it off your camera.

Dirt antagonizes the riders, too. But grit and stamina prevail, along with humor and kindness. Racers need pit crews, so families spread out to refuel riders. Local spectators, mud fleas, as they are affectionately called, gather at mud holes with drink-filled coolers and music, ready to pull machines out of the mud when they’re stuck.

Boys and girls start racing at age 4. When they fall over, any nearby parent will set them upright and give the universal wrist gesture that means: Hit the gas! You got this!

Rebecca Soderholm, a photographer whose work focuses on rural America, is an associate professor at Drew University. 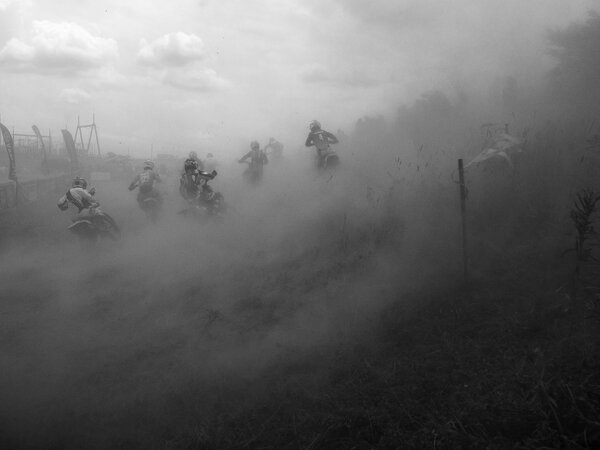 Opinion | Andrew Rannells: What Words Can I Give You That Will Comfort Me?