NASHVILLE — When Tallu Schuyler Quinn started handing out sandwiches in Nashville’s homeless camps, she was responding to a need that seemed both obvious and intractable. People were hungry, and she fed them. In a few hours, they would be hungry again.

That was 2007, the year she established a Nashville branch of Mobile Loaves & Fishes, a nonprofit based in Austin, Texas. In 2009, Ms. Quinn planted an organic vegetable garden because hungry people need more than calories; they need nutritious calories. In 2010, when a devastating flood hit Middle Tennessee, she was ready — her team delivered 19,000 meals in just three weeks. Ms. Quinn was 30 years old.

As these efforts grew, the question of how to feed hungry people became Ms. Quinn’s life’s work. In 2011, she founded the Nashville Food Project, an organization whose mission is “Bringing people together to grow, cook and share nourishing food, with the goals of cultivating community and alleviating hunger in our city.”

That crucial work that has just earned Ms. Quinn, now 41, the inaugural Woman of Purpose Award from Les Dames d’Escoffier International, a philanthropic organization of women who work in the food, beverage and hospitality industries, as well as a book deal from Convergent Books, a division of Penguin Random House. The award celebrates a woman who works at the intersection of “global sustainability, food justice and public health,” as the award announcement put it. The book will be the memoir of an ordinary person living an extraordinary life of service.

Running a food-justice organization in her own hometown may not seem like the likeliest professional path for someone with a bachelor’s degree in papermaking and bookbinding from the Appalachian Center for Craft in Smithville, Tenn., and a master’s degree in divinity from Union Theological Seminary at Columbia University in New York. But seminary study introduced Ms. Quinn to liberation theology, a movement that aims to free others from oppression, including the oppression of poverty. Working alongside impoverished farmers in Nicaragua helped Ms. Quinn refine her understanding of the need for food that sustains bodies and communities alike.

This emphasis on community is what’s most inspiring about the Nashville Food Project. To reach even more hungry Nashvillians, it shifted in 2012 from a self-contained system to a collaborative model of distribution, partnering with other local poverty-disrupting organizations — last year more than 70 of them — to distribute meals and produce boxes to communities where those groups were already established. Places like FiftyForward, which serves seniors; Open Table Nashville, which feeds the homeless; the Nations Ministry Center, which welcomes refugees; and Launch Pad, which provides safe places to sleep for homeless L.G.B.T.Q. youth.

The emphasis on partnership extends beyond cooperation between nonprofits, embracing the shared work of hundreds of others. In its own gardens, for example, the Nashville Food Project grows food for the meals it prepares, but it also offers access to garden plots, tools, water, seeds and training to urban families eager to grow their own food. An initiative called Growing Together provides the same resources to refugees who arrive with both farming expertise and a hunger for native foods that aren’t readily available here. The opportunity to sell produce through a subscription program provides these farmers income as well as a source of support and community.

Nearly 13 percent of Nashvillians live below the poverty line. Often they don’t have enough to eat or can afford only the poorest quality food. At the same time, according to Nashville Food Project data, more than 40 percent of Nashville’s food typically ends up in a landfill. 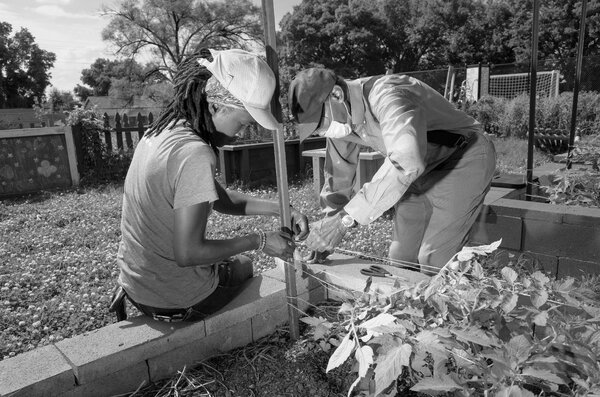 This city’s meteoric growth has made it even more difficult for people living below the poverty line. According to a new report from Mayor John Cooper’s Affordable Housing Task Force, nearly half of all Nashville renters pay more for housing than the maximum percentage of income recommended by the U.S. Department of Housing and Urban Development. The city has already implemented plans to triple investment in affordable housing, but it will be a very long time before affordable housing is within reach for all Nashvillians. When people pay too much in rent, they have even less to spend on food, and the people at the Nashville Food Project will no doubt continue to seek new ways to help.

But Tallu Schuyler Quinn will no longer be leading those efforts. Diagnosed in July 2020 with grade 4 glioblastoma, an incurable form of brain cancer, she has spent the last 11 months enduring a grueling treatment designed to give her as much time as possible. And she has been writing about the experience, even as the tumor has taken away her ability to read.

Her CaringBridge posts are achingly honest, filled with love for her entire extended family but especially for her husband and young children, and filled with grief at the thought of leaving them too soon. She shares unvarnished accounts of the indignities of cancer, and cancer treatment, but invariably her essays are also deeply felt and beautifully rendered meditations on the gifts — yes, the gifts — of struggle. Of suffering. Of temporality itself. A spirit of generosity and flashes of wit shine through even her saddest words.

Taken together, these essays of living a spiritually and emotionally rich life in a failing body are nothing less than a master class in how to be fully human. In recalling the events of her own life, and in plumbing those memories for meaning, Ms. Quinn prods readers to find meaning in their own struggles, to recall the too often overlooked beauty in their own lives.

Perhaps most of all, her honesty calls on us all to consider our own power against despair, our own power to reverse injustice. “To be restored to wholeness, to stay hopeful that healing — whatever that means to us — is possible,” she writes, “I believe in these things. I believe in it for me, for you, and for all of humanity. And for this earth we have misused and abused.” Then, later in the same essay, “I think about how my purpose may be the same in death as it continues to be in life — surrendering to the hope that our weaknesses can be made strong, that what is broken can be made whole.”

Reading her aching accounts of life with cancer, it becomes easier to understand the miracle that is the Nashville Food Project. As a very young woman, Ms. Quinn saw a desperate need in her city. Step by step, enlisting thousands of others in a shared mission, she found a vast array of ways to meet it.

Margaret Renkl, a contributing Opinion writer, is the author of the books “Late Migrations: A Natural History of Love and Loss” and the forthcoming “Graceland, At Last: Notes on Hope and Heartache From the American South.”

Opinion | How Democrats Should Sell Themselves to Avoid Electoral Disaster