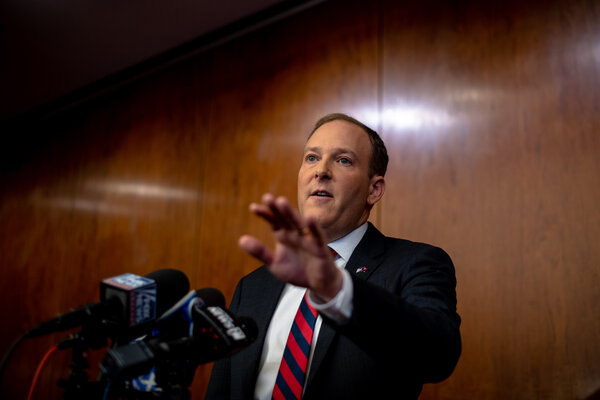 I called Mark Levine, the Manhattan borough president, on Monday morning to see how worried he was about New York’s governor’s race. Levine, a Democrat who’d just come from campaigning with Gov. Kathy Hochul, was pretty worried. Yes, polls have shown Hochul consistently ahead of the Trumpist Republican congressman Lee Zeldin, but Levine thought the race could go either way.

“I don’t think we know how accurate polls are in New York State,” Levine told me, noting how long it’s been since New York has had a competitive statewide general election. “And there’s no doubt that Zeldin has used the crime issue to whip up energy on his side.”

There are many reasons to be aghast at the idea of a gun-loving election denier taking power in a state that’s been as reliably liberal as New York. One of them is what Zeldin might do to New York’s status as a haven for abortion access.

Though Zeldin is a co-sponsor in the House of the Life at Conception Act, which would bestow full personhood rights on embryos, he’s tried to neutralize abortion as a campaign issue by insisting that he couldn’t change New York’s abortion law even if he wanted to.

There’s something bizarre about this argument: As Assemblywoman Deborah Glick pointed out to me, Zeldin is telling pro-choice New Yorkers that we can rely on the Legislature to protect us from him. And while it’s true that Zeldin wouldn’t be able to ban abortion anytime soon, there are many things, short of making abortions illegal, that a governor can do to make them harder to get.

Zeldin’s strategy is similar to the one that Christine Drazan, the anti-abortion Republican with a decent chance of becoming governor of Oregon, is employing in her race. Both are trying to use Democrats’ success in passing state-level abortion protections against them, by arguing that these laws make their personal opposition to abortion moot.

“I will not change and could not change New York’s abortion law,” Zeldin said in one ad, while Drazan told Oregon Public Broadcasting that “Roe is codified into Oregon law. Regardless of my personal opinions on abortion, as governor, I will follow the law.” But when it comes to reproductive rights, the letter of the law isn’t the only thing that matters.

New York, for example, recently passed a statute that, among other things, prohibits law enforcement from cooperating with out-of-state prosecutors on most abortion cases. But whether a Governor Zeldin would be totally constrained by the law is unclear. He has promised to remove Manhattan’s district attorney, Alvin Bragg, from office, even though Bragg was elected last year with 84 percent of the vote, suggesting a willingness to push the limit of his authority. Oregon, meanwhile, has no such law, only a written commitment from the governor, the Democrat Kate Brown, to resist out-of-state legal actions over abortion.

In both Oregon and New York, there are lots of administrative levers governors could pull to stymie reproductive health care. Zeldin has said it would be a “great idea” to appoint an anti-abortion health commissioner, a position with a lot of power in the state. Shortly after the draft of the Supreme Court decision overturning Roe was leaked in May, Hochul created the $25 million Abortion Provider Support Fund to help New York providers care for an expected influx of out-of-state patients, and allocated $10 million more to help clinics beef up their security. Zeldin would almost certainly do away with grants like these. Drazan has criticized a similar grant program in Oregon, referring derisively to the funding of “abortion tourism.”

New York’s governor “controls the purse strings, because he controls the division of the budget,” said Glick, who led the fight to pass the 2019 Reproductive Health Act, which codified Roe and expanded the number of health professionals who can legally perform abortions in the state. As governor, she said, Zeldin could withhold money from Planned Parenthood and restrict Medicaid funding for abortion. “You can slowly starve some programs by simply not providing resources in a timely fashion.”

Of course, the people who care deeply about the nuances of reproductive health policy are probably already voting for Democrats, which is why pointing out all the ways right-wing governors could erode abortion access feels so dispiriting. Politically, the anti-abortion movement has often been at its strongest when it’s fighting for regulations that strangle providers with red tape or cut off public funding, because most people aren’t going to get far enough into the weeds to get outraged.

While Roe still stood, the anti-abortion movement used a strategy of regulatory siege to chip away at abortion rights in red states. With anti-abortion governors, a similar strategy could be deployed in blue ones. Speaking to New York Right to Life in April, Zeldin promised an open-door policy. “Come on in to the second floor of the New York State Capitol,” he said. “It’s been a while, but you come right on in.”

Opinion | ‘Climate Change Is Not a Subjective Thing.’ How Does the U.S. Approach to the Environment Look From Abroad?

Opinion | An Uncomfortable Seat at the Table

Putin’s invasion of Ukraine can only be stopped by China, former MI6 chief claims