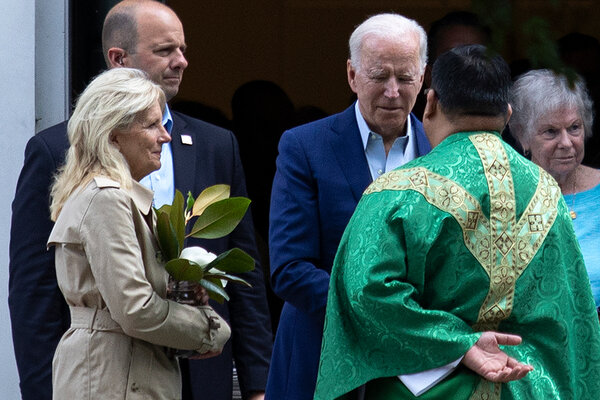 To the Catholic Bishops of My Church:

I am a 76-year-old woman born and raised Catholic as well as Catholic-educated through college. It is with a saddened heart that I find it necessary to part ways with my church.

As a registered nurse, I have witnessed the consequences of denying women birth control or medically necessary abortions. I have witnessed the pain of my cousin’s family upon learning that her son was molested by a priest. And now you are considering denying communion to President Biden, who is at his core a good, decent, moral individual, because of his support for abortion rights.

No matter his personal religious beliefs, Mr. Biden represents all women’s rights to their own individuality and dignity. Most of all, he stands for the constitutional separation of church and state.

I choose to follow my president and not the man-made dogmas of the Catholic Church.

Let’s see if I have this straight. A group of conservative bishops is spending its time and resources thinking up a way that it can prevent President Biden, a devout Catholic, from receiving the sacrament of communion.

Of course, these are the same bishops who, as your article points out, had no problem turning a blind eye to Donald Trump’s sexual escapades. This same group of hypocrites was mute in the face of Mr. Trump’s vitriol against the handicapped, minorities, immigrants attempting to escape poverty and violence, the L.G.B.T. community and scores of others.

And now it wants to punish a president who is trying to alleviate poverty and racial disparities in this country and to show compassion to immigrants seeking a better life in this country. How rich! And yet the leader of the bishops’ Committee on Doctrine claims that this has nothing to do with politics?

John F. Kennedy famously said, “I do not speak for my church on public matters, and the church does not speak for me.” The statement helped to convince Americans that, if Mr. Kennedy was elected, his policies would be dictated not by the hierarchy of his church, but by what he believed was good and right for the country. It upheld the constitutional separation of church and state and recognized that most Americans are neither Catholic nor in agreement with many of the church’s positions.

Conservative bishops of today’s Catholic Church seem to have forgotten that history and the principles it represents. In a likely futile effort to reverse declining church membership, they want to dictate political policy by refusing sacraments to those who don’t adhere rigidly to their viewpoint. If they insist, they may find it impossible ever to see a third Catholic president elected.

Will any of the Catholic Supreme Court justices be refused holy communion if they uphold Roe v. Wade in court cases? Is that the warning of this religious attack on the president of the United States?

The Supreme Court Ruling on the Health Law

Honestly, what were Justices Samuel A. Alito and Neil M. Gorsuch thinking in their dissents in the Supreme Court ruling upholding the Affordable Care Act? Their position (and that of the lower court judges in the case) would have blown up the American health care system. In the middle of a pandemic no less.

This defies common sense and good policy. It is also judicial activism of the worst sort.

Lorelie S. Masters
Washington
The writer is a lawyer.

Opinion | The Shrinking of the American Mind