Readers criticize the president for backing away from a campaign promise to revisit relations with Saudi Arabia. Also: Donald Trump’s reappearance at CPAC. 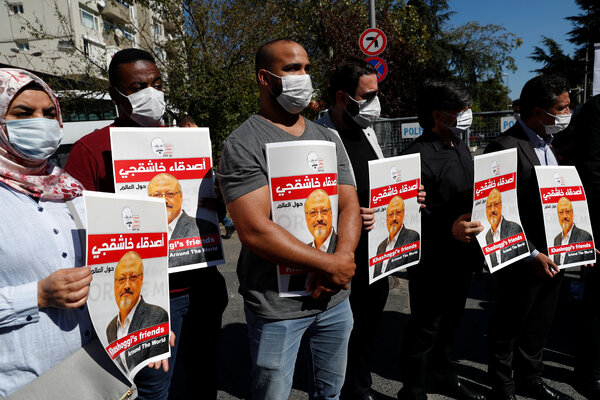 The Biden administration’s decision to refuse to punish the Saudi crown prince, Mohammed bin Salman, for ordering the murder of the journalist Jamal Khashoggi is morally unacceptable. It is also bad foreign policy.

From its brutal war in Yemen to its abysmal internal human rights record, the Saudi government is a force for repression and instability in the Middle East.

The Biden administration should reverse course and directly sanction the Saudi crown prince. It should also limit his ability to do further damage in the region. That means following up on President Biden’s pledge to stop support for offensive operations in Yemen by blocking all pending U.S. arms sales, maintenance and logistical support to Saudi Arabia and the United Arab Emirates, the other main outside power responsible for the carnage there.

As a candidate for president, Joe Biden promised that America would not “check its values at the door” when it came to dealing with the Saudi government. Now is the time to prove it.

William D. Hartung
New York
The writer is director of the Arms and Security Program at the Center for International Policy.

The Biden administration took relatively little action on some of the Saudis involved in Jamal Khashoggi’s killing for fear of rupturing the U.S. relationship with Saudi Arabia.

Instead, our fraught relationship with Saudi Arabia could be fully healed with a stroke of the pen. We need only suggest to King Salman that he replace Crown Prince Mohammed bin Salman with one of the other princes. It’s been done before.

As much as we would like quick and severe punitive reaction to the killing of Jamal Khashoggi, the geopolitical situation is extremely complex.

It cannot be a gut response. It will take time and strategy to respond effectively to this heinous act.

Does a family of 4 really need $6,426 a month for a basic standard of living? It depends

‘He’s in!’ Donald Trump to run for President in 2024, according to ex-White House aide