Readers urge that the epidemic of shootings be given daily coverage like Covid and discuss “red flag” laws and licensing of ammunition. 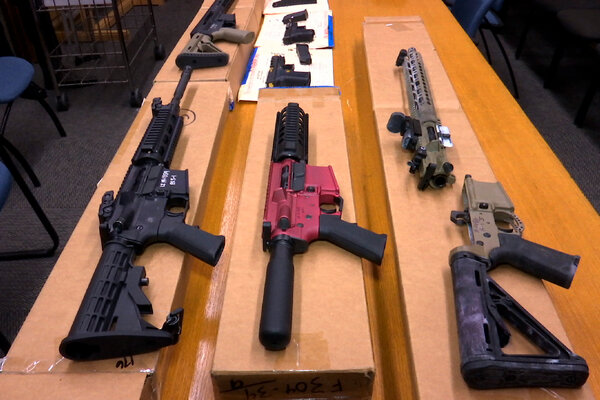 President Biden said, “Gun violence in this country is an epidemic.” Twice. It is.

Coverage of the Covid epidemic has been massive: daily articles and graphics, death rate figures, quotes from prominent people, etc. What’s the moving seven-day average of shootings? What’s the death rate for daily gun violence? Which states have legislated to contain this epidemic?

Why does one major epidemic merit such enormous space and another so much less? How many lives could you save through continual public awareness with a daily drumbeat of even half the coverage given to Covid?

President Biden announced that one area the Justice Department will focus on is providing a model law for so-called red flag orders, a.k.a. extreme risk protection orders, or ERPOs. There is a patchwork of such laws in the 19 states and Washington, D.C. These variously give the police, and in many states family members, legal standing to petition a court to remove guns from owners who are at significant risk for suicide, homicide or accidents via guns. Of the 19, just three give legal standing to health care professionals: Washington, D.C., Maryland and Hawaii.

Physicians and other health personnel are often faced with quandaries about patients who are at high risk for gun tragedy. They are stymied by HIPAA requirements that breaching confidentiality requires a “serious and imminent risk.” The Department of Health and Human Services has proposed a more workable standard: “serious and reasonably foreseeable.”

Model laws for ERPOs should give standing to physicians and other appropriate health care professionals. The model law should also include civil lawsuit immunity for failure to petition courts. This will mitigate the perverse incentive of overreporting as a form of defensive medicine.

As a former participant in the Brady Campaign, I am quite familiar with the points being advocated by Mr. Gross. However, I have come to realize that with more guns than people in the United States, it is time for a new approach. Reducing gun violence by regulating guns is like trying to fight crack cocaine by regulating pipes. Guns deliver, bullets kill.

We can keep arguing about guns, or we can do something entirely different.

First, license buyers of ammunition. A license would take the form of a photo ID, and obtaining it could be as easy as watching a video, answering some gun-safety questions, paying a small fee and passing a background check.

Second, all bullets should be microstamped with a serial number shared only by other bullets in the boxes they are sold in. Sellers of ammunition would scan a buyer’s license and a bar code on the box at the point of sale. Since shell casings recovered at a crime scene could easily be traced back to buyers and the stores where they were purchased, there would be a powerful incentive to see that bullets were sold, stored and handled responsibly.

Opinion | Feeding the Hungry, One Wholesome Meal at a Time

Opinion | Vaccines for the Palestinians

‘End of the Triple Lock and nothing for the WASPI women!’ MP rages at Sunak over Budget

Kafer: Don’t postpone repeal of the last Prohibition-style laws just to save the liquor stores