Forty-six years have passed since the Vietnam War ended on April 30, 1975. While some Americans may prefer to forget its atrocities, and Vietnam is focused on forgiveness and the future, the wounds of Agent Orange victims still demand attention.

Between 1962 and 1971, the U.S. military employed approximately 19.5 million gallons of herbicides in South Vietnam to clear vegetation believed to conceal enemy troops and which provided food for them, as part of Operation Ranch Hand. Agent Orange, the most widely used of those defoliants, destroyed five million acres of Vietnamese forests and damaged some 500,000 acres of cropland.

The herbicide contains dioxin, one of the most toxic substances known to science, which remained in the contaminated soil and sediment of water bodies for decades. Before dioxin hot spots were contained and cleanup efforts began, the contamination had spread to fish and shrimp, and, from there, to more people.

On Jan. 26, a French-Vietnamese woman and victim of Agent Orange brought a case against 14 chemical giants before a French court to seek damages for the harmful effects herbicides have had on her and three generations of her family. She seeks to hold the companies, including Dow Chemical and Monsanto (since acquired by Bayer), accountable for their role in making or selling Agent Orange.

At 79, the woman, Ms. Trần Tố Nga, is fighting what may be the last battle of her life. She has cancer, high iodine levels in her blood, genetic abnormalities, among other illnesses linked to Agent Orange. Her children were born with genetic abnormalities; one died when she was only few months old.

With much of the world preoccupied with the pandemic, Ms. Nga’s fight for justice has been largely being ignored — the same way the innocent people exposed to herbicides sprayed from American military aircrafts in Vietnam, Laos and Cambodia have been overlooked for nearly half a century.

The first time I heard of Agent Orange was in 1980 when I was 7 years old and living in South Vietnam. A neighbor was standing in our kitchen, pointing at a fish we had caught in a stream close to home. The fish was a great catch, but it had two tails and a gigantic, deformed head.

“Don’t eat that fish,” the neighbor told us, “It has been contaminated by chất độc da cam.”

Years later, after I learned English and came across the term Agent Orange, I wondered why Americans used an ambiguous-sounding name for this deadly chemical while Vietnamese farmers, like my parents and our neighbors, chose instead to address it head-on: chất độc da cam, or, “the poison, Agent Orange.”

In the 1980s, unlike many Americans who had the luxury of choosing their food, my parents did not. Over half a decade had passed since the war ended, but we were still living under the trade embargo America had placed on Vietnam. We were starving. My parents kept the fish alive in a deep bucket filled with water for some days, replacing the water regularly as they debated what to do. They reasoned that we couldn’t be certain the fish’s features were caused by chemical contamination.

In their desperation, they argued that even if the fish was contaminated by those American chemicals, the water drawn from the depths of our well would help flush out the toxins.

In the end, my mother went ahead and prepared the fish, much to my joy and that of my two elder brothers. I remember my stick-thin body trembling as I devoured that protein-rich meal, cooked tenderly in lemongrass and ginger harvested from the garden of my mother’s love.

Years later, I would look back and wonder at that moment and at the war that took so many lives and traumatized many more. To survive, my family and most of our neighbors were forced to consume whatever food we could find.

After I became a mother, I would count the fingers and toes of my newborn daughter, and later those of my son. My eyes would tear up each time.

Many mothers are not as lucky as me. Not Ms. Nguyệt, who wept with me in the yard of the Thanh Xuân Peace Village, an orphanage that provides charity care for Agent Orange victims near Hanoi where I volunteered organizing activities for kids. Ms. Nguyệt’s husband had fought in the contaminated areas in the south and died of cancer. As a single mother who was often out working odd jobs to survive, she had no means of caring for their only child — a boy born with deformities — and had to leave him at the orphanage. It is not known how many parents gave up children born with deformities, but many such orphanages exist throughout Vietnam. 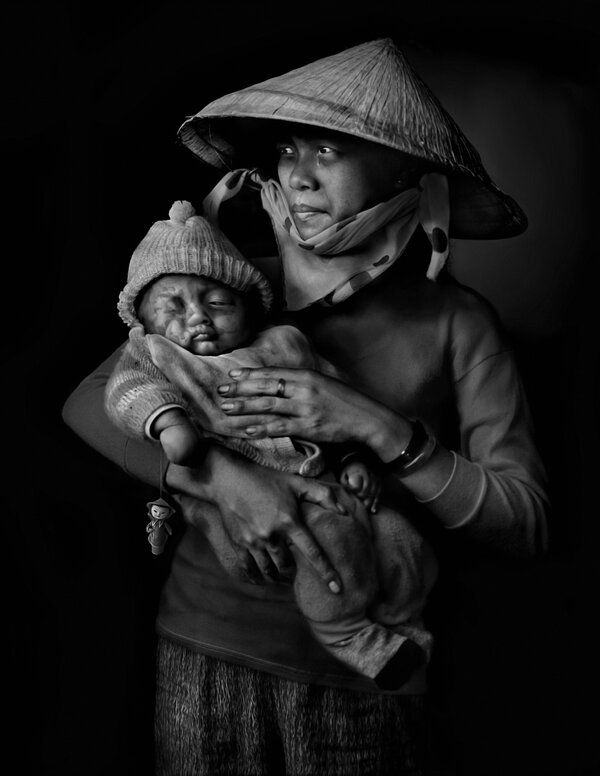 Ms. Nguyệt and her son are among the several million Vietnamese estimated by the Vietnam Association of Victims of Agent Orange, or the VAVA, to be living with the horrific consequences of the defoliant campaign. The number of Laotian and Cambodian victims is unknown, but researchers have been working on assessing the impact of the herbicides there.

Scientists in Vietnam have confirmed high levels of dioxin in the blood and breast milk of people living in hot spots. And in a growing list, the U.S. Department of Veterans Affairs has linked many types of cancers and health problems to these chemicals. American veterans and their offspring who meet certain requirements are eligible for benefits. Over the years, U.S. veterans have secured settlements from chemical manufacturers.

Vietnamese and other victims in Southeast Asia are still waiting for the U.S. government to provide a similar level of assistance. It took decades for the United States to commit almost $400 million to clean up hot spots and help victims in the heavily sprayed provinces. The United States still has not taken responsibility for the harmful effects of herbicides in Laos or Cambodia.

Vietnamese, Laotian and Cambodian victims of dioxin have never received compensation from the chemical giants that produced, sold and reaped profits from the sale of herbicides. Ms. Nga’s lawsuit could be the first that results in compensation for a Vietnamese victim, according to the Collectif Vietnam Dioxine, the organization supporting her case.

In 2004, VAVA filed a class-action suit in the United States against chemical manufacturers on behalf of millions of Vietnamese. However, the American court ultimately dismissed the case on the grounds that it lacked sufficient basis in U.S. and international law and that the supplying of herbicides didn’t amount to a war crime.

For years, I have been asking myself this question: Why has the United States offered at least some form of compensation to Americans, but has not done more for the Vietnamese who were also exposed and who have spent years seeking justice?

Nguyễn Phan Quế Mai, Ph.D., is a novelist and journalist. She researches the impact of wars on veterans and civilians. Her first novel in English, “The Mountains Sing,” is a narrative of 20th-century Vietnam.

COMMENTARY: A brief history of cranking the volume up to 11 — and beyond

Colorado’s legislative session starts in January. Everything after that is TBD. – The Denver Post