Shortly after 8 p.m. on May 25, 2020, Derek Chauvin, a Minneapolis police officer, placed his knee on George Floyd’s neck and kept it there for more than nine minutes. None of the three other officers standing near Chauvin intervened. Soon, Floyd was dead.

Initially, the police gave a misleading account of Floyd’s death, and the case might have received relatively little attention but for the video that Darnella Frazier, a 17-year-old, took with her phone. That video led to international outrage and, by some measures, the largest protest marches in U.S. history.

Today, one year after Floyd’s murder, we are going to look at the impact of the movement that his death inspired in four different areas. 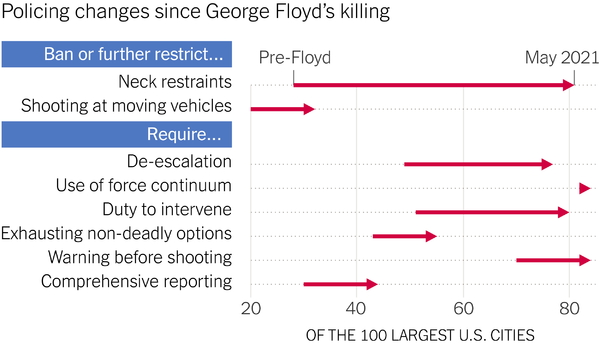 Most of the states and cities passing these laws are run by Democrats, but not all. Kentucky, Indiana and Iowa have done so, too. At the federal level, the House has passed a bill named for Floyd that would limit police use of force and make it easier to prosecute officers for wrongdoing. The Senate has not passed any policing bill.

2. A focus on racism

The Black Lives Matter movement — which was re-energized by the killings of Floyd, Breonna Taylor and others — has called for changes to much more than policing. The movement has demanded that the country confront its structural racism.

In response, many companies and institutions have promised to act. The National Football League apologized for past behavior. NASCAR banned the Confederate flag from its events. McDonald’s, Amazon and other companies pledged to hire more diverse workforces.

“Non-Black employees joined with their Black colleagues to demand the hiring of more Black people,” The Washington Post’s Perry Bacon Jr. wrote. “So companies and institutions stopped whining about supposedly bad pipelines and started looking beyond them.”

It’s still unclear how much has changed and how much of the corporate response was public relations.

Initially, public sympathy for the Black Lives Matter movement soared. But as with most high-profile political subjects in the 21st-century U.S., opinion soon polarized along partisan lines.

Today, Republican voters are less sympathetic to Black Lives Matter than they were a year ago, the political scientists Jennifer Chudy and Hakeem Jefferson have shown. Support among Democrats remains higher than it was before Floyd’s death but is lower than immediately afterward.

There are a few broad areas of agreement. Most Americans say they have a high degree of trust in law enforcement — even more than did last June, FiveThirtyEight’s Alex Samuels notes. Most also disagree with calls to “defund” or abolish police departments. Yet most back changes to policing, such as banning chokeholds.

4. A crime surge, much debated

It’s clear that violent crime has risen over the past year. It’s not fully clear why.

Many liberals argue that the increase has little to do with the protest movement’s call for less aggressive policing. The best evidence on this side of the debate is that violent crime was already rising — including in Chicago, New York and Philadelphia — before the protests. This pattern suggests that other factors, like the pandemic and a surge of gun purchases, have played important roles.

Many conservatives believe that the crime spike is connected to the criticism of the police, and they point to different evidence. First, the crime increase accelerated last summer, after the protests began — and other high-income countries have not experienced similar increases. Second, this acceleration fits into a larger historical pattern: Crime also rose in Baltimore and Ferguson, Mo., after 2015 protests about police violence there, as Patrick Sharkey, a sociologist and crime scholar, notes.

“When there have been large-scale protests against police, it is pretty clear that some police have stopped doing their jobs, and that’s destabilizing,” Sharkey has told us. But that doesn’t mean that the pre-protest status quo was the right approach, he emphasizes. Brute-force policing “can reduce violence,” he said, in a Q. and A. with The Atlantic. “But it comes with these costs that don’t in the long run create safe, strong, or stable communities.”

How can police officers both prevent crime and behave less violently, so that they kill fewer Americans while doing their jobs?

Some experts say that officers should focus on hot spots where most crimes occur. Others suggest training officers to de-escalate situations more often. Still others recommend taking away some responsibilities from the police — like traffic stops and mental-health interventions — to reduce the opportunities for violence.

So far, the changes do not seem to have affected the number of police killings. Through last weekend, police officers continued to kill about three Americans per day on average, virtually the same as before Floyd’s murder.

A timeline of the events of the past year.

President Biden will meet with members of Floyd’s family at the White House today. Follow updates here about the anniversary.

More than 150 veterans’ cemeteries, including Arlington, will drop restrictions on gatherings before Memorial Day.

Donald McGahn, who was Trump’s White House counsel, will probably testify about the Russia inquiry next week.

Who will win New York City’s Democratic mayoral primary next month? A lack of polling makes it hard to predict.

European leaders moved to ban air travel to, from and over Belarus after its president forced a flight to land to arrest a dissident journalist onboard.

Myanmar’s military junta has imprisoned more than 30 poets since the Feb. 1 coup.

The viral video “Charlie Bit My Finger” will leave YouTube in its original 2007 form, after the creators sold it as an NFT.

New advice from the C.D.C.: Don’t kiss or snuggle your ducks and chickens.

100 years ago: This is what a prosperous Black neighborhood in Tulsa, Okla., looked like before the 1921 race massacre.

Sleight of hand: It’s the greatest card trick in magic, and the 94-year-old who knows its secret isn’t telling.

“Because I can”: The gymnast Simone Biles is doing things no one else would even try.

A Times classic: Which baseball team does your ZIP code support?

Lives Lived: Ruth Freitag, who worked at the Library of Congress for nearly 50 years, was a librarian to the stars. Carl Sagan, Isaac Asimov and others sought out her encyclopedic knowledge of scientific resources. She died at 96.

To help commemorate its 125th anniversary, The Times Book Review is highlighting some noteworthy first mentions of famous writers. You can find the full list here. Some of our favorites:

F. Scott Fitzgerald: In 1916, Princeton admitted only men, and they would often play women’s roles in campus plays. The Times featured a photo of Fitzgerald in character, calling him “the most beautiful showgirl.”

Patricia Highsmith: In 1939, the novelist appeared in an article about a “Greek Games” competition among students at Barnard: “A messenger, Joan Roth, rushed in to say that Persephone still lived and a rejoicing group danced in. Eight tumblers did tricks before the crowd to distract the still disconsolate Demeter.” Highsmith was among the student acrobats.

Ralph Ellison: In 1950, two years before the publication of “Invisible Man,” Ellison reviewed a novel called “Stranger and Alone,” by J. Saunders Redding. Ellison wrote that Saunders “presents many aspects of Southern Negro middle-class life for the first time in fiction.”

John Updike: An acclaimed short-story writer who had yet to publish a novel, Updike appeared in an advice article in 1958, encouraging parents to teach their children complex words. “A long correct word is exciting for a child,” he said. “Makes them laugh; my daughter never says ‘rhinoceros’ without laughing.” — Sanam Yar, a Morning writer

This skillet dinner features chicken in a leek and farro pilaf. Roasted carrots make a nice side.

The “Hamilton” star Renée Elise Goldsberry is the breakout star of the pop-group reunion comedy “Girls5eva,” in which she plays a delusional diva.

Search for coconut crabs on an island in French Polynesia.

The hosts discussed Senator Rand Paul, and Stephen Colbert will bring back a vaccinated audience.

The pangrams from yesterday’s Spelling Bee were apolitical, capitol, occipital, optical, political and topical. Here is today’s puzzle — or you can play online.

P.S. The first “Star Wars” movie premiered 44 years ago today. Vincent Canby’s Times review called it “the most elaborate, most expensive, most beautiful movie serial ever made.”

“The Daily” is about a student free speech case. On “Sway,” Eliot Higgins discusses Bellingcat’s journalism.

Lalena Fisher, Claire Moses, Tom Wright-Piersanti and Sanam Yar contributed to The Morning. You can reach the team at themorning@nytimes.com.

U.S. airlines making push for new round of payroll assistance