There is a new Covid-19 mystery in India, and it is far grimmer than the first one.

For most of the past year, Covid deaths across much of Asia and Africa have been strikingly low, as I described last month. And they remain low in nearly all of Africa and East Asia — but not India, which is suffering a terrible outbreak. Hospitals are running out of oxygen to treat patients, and confirmed Covid deaths have climbed to 2,000 per day, up from fewer than 100 in February. The true death toll is even higher.

The sharp increase has surprised many people, both inside and outside India. “India’s massive Covid surge puzzles scientists,” as Smriti Mallapaty wrote in Nature. “I was expecting fresh waves of infection,” Shahid Jameel, a virologist at Ashoka University, said, “but I would not have dreamt that it would be this strong.” 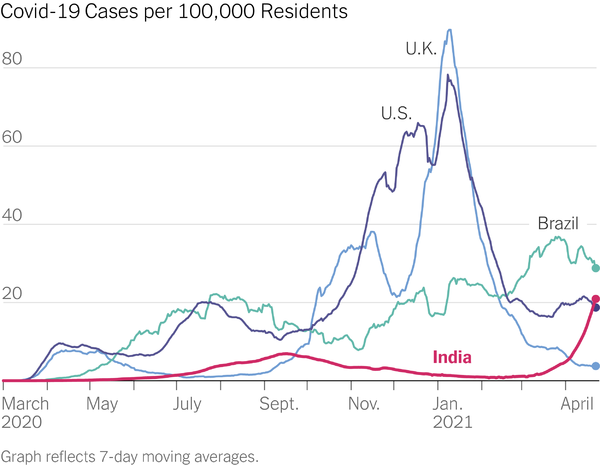 The price of hubris

To make some sense of what’s happening, it helps to go back to last year, when Indian doctors and officials were preparing for waves of serious Covid illnesses. But those waves never quite arrived. Instead, millions of people contracted only mild cases.

The most plausible explanations — the amount of time people spend outdoors in India, the low levels of obesity, the population’s relative youth and the possibility that previous viruses had created some natural immunity — all seemed to suggest that India was not simply on a delayed Covid timetable. The country, like many of its neighbors, seemed to be escaping the worst of the pandemic.

Scientific research suggesting that about half of adults in major cities had already been infected was consistent with this notion. “It led to the assumption that India had been cheaply, naturally vaccinated,” Dr. Prabhat Jha, an epidemiologist at the University of Toronto, told me.

Government officials acted particularly confident. As Ramanan Laxminarayan, a Princeton University epidemiologist based in New Delhi, told Nature, “There was a public narrative that India had conquered Covid-19.” Some scientists who thought that a new Covid wave remained possible were afraid to contradict the message coming from Prime Minister Narendra Modi’s government. Modi has a record of stifling dissent, and Freedom House, the democracy watchdog group, recently said India had become only a “partly free” country that was moving “toward authoritarianism.”

Confident they had beaten Covid, government officials relaxed restrictions on virtually all activities, including weddings, political rallies and religious gatherings. The northern town of Haridwar held one of the world’s biggest gatherings this month, with millions of people celebrating the Hindu festival Kumbh Mela.

By mid-March, though, the virus was beginning to reassert itself. A major factor appears to be that many people who previously had mild or asymptomatic cases of Covid remained vulnerable to it. (A recent academic study, done in China, suggests that mild cases confer only limited immunity.) The emergence of contagious new variants is playing a role, too. This combination — less immunity than many people thought, new variants and a resumption of activities — seems to have led to multiple superspreader events, Dr. Jennifer Lighter of New York University told me.

The situation is so dire that some Indian crematories are overwhelmed. Suresh Bhai, who works in one in the western state of Gujarat, told The Times that he had never seen such a never-ending assembly line of death.

The available solutions are no secret. The same two strategies have worked around the world: restricting the activities that spread the virus, and accelerating the pace of vaccinations.

Over the past two weeks, some local governments, including in Delhi and Mumbai, have announced restrictions on travel, weddings, shopping and other activities. Speeding up vaccinations will be more complicated. About 10 percent of India’s population has received at least one shot, leaving more than a billion people to vaccinate fully.

To do so, India — a major vaccine manufacturer — has recently cut back on exporting doses. Indian officials have also criticized the Biden administration for not exporting more vaccine supplies to India, given the large U.S. supply. (The U.S. said yesterday that it would do so.)

Amid all the suffering, there is one glimmer of potential good news, Jha said. Caseloads in India’s second-most populous state — Maharashtra, home to Mumbai — have often been a leading indicator of national trends, and cases there have leveled off over the past week. It’s too early to know whether that’s just a blip, but it would be a big deal if the situation in Maharashtra stabilized.

Confirmed new cases in the U.S. have fallen 18 percent since April 14 and remain in the narrow range where they have held since late February.

Fully vaccinated Americans will be able to visit the E.U. this summer.

Michigan’s hospitals are admitting more younger patients than at any point in the pandemic, many very ill.

The C.D.C. issued cautious guidelines for summer camps: Kids can be within three feet of each other outdoors but should wear masks most of the time.

The U.S. immigration detention system is rife with outbreaks. A Times video investigation examined why.

“Nomadland” was the night’s big winner, taking home Oscars for best picture, best actress for Frances McDormand and best director for Chloé Zhao, the first woman of color to win the award.

Anthony Hopkins, 83, won best actor for his role in “The Father.” The late Chadwick Boseman had been a favorite. Here are all the winners.

The show didn’t have jokes, musical numbers or clip montages. It felt like “a cross between the Golden Globes and the closing-night banquet of a long, exhausting convention,” Mike Hale writes.

And here are the red-carpet looks.

A fire in a Baghdad hospital killed at least 82 people, mostly Covid patients and their relatives.

Officers using deadly force rely on a 30-year-old Supreme Court decision. The movement launched by the death of George Floyd is trying to change that.

Criminal groups have taken over parts of Venezuela, as the country’s economic crisis grows. The Times traveled through one of the regions they control.

Fighting erupted in the Somali capital, Mogadishu. Opponents of President Mohamed Abdullahi Mohamed accuse him of a power grab.

A leaked audiotape offers a glimpse into the power struggles of Iranian leaders.

“It begins to close the open wound”: Politico’s Charlie Mahtesian, whose grandfather survived the Armenian genocide, praises President Biden’s decision to recognize it.

The Times’s Gail Collins and Bret Stephens in conversation.

Slander, Inc.: A Times reporter wanted to learn about rumor websites. So he wrote a post about himself, and watched it spread.

Tech Fix: Apple’s new privacy tool gives users more control over their data. Here’s how it works. (It could have lasting effects for apps like Facebook.)

Lives Lived: Bob Fass hosted an anarchic and influential radio show in New York for more than 50 years, with guests including Bob Dylan and Abbie Hoffman. Fass died at 87.

It’s hard to imagine the teen drama “Dawson’s Creek” without its theme song, “I Don’t Want to Wait,” by Paula Cole. Yet — to the dismay of many fans — that’s the only way to watch it on streaming platforms. Nearly all of the original music for the series, which began airing in the late ’90s, is missing on Netflix, Hulu and other platforms.

It’s an issue that plagues many shows that find a second life on streaming: They no longer have the rights to use their original soundtracks, as Calum Marsh writes in The Times.

TV shows pay for the right to use songs. Before streaming, producers often opted for short-term licenses on popular songs, to save money. But streaming has increased the number of shows that endure for years, leaving some without their music.

Newer shows aren’t making the same mistake. “We have to get rights forever,” Robin Urdang, an Emmy-winning music supervisor, said. And some old shows are responding to the fan outcry: Cole said a new deal means that her song will soon be back as the “Dawson’s Creek” opener. — Sanam Yar, Morning writer

This lemon-raspberry danish is simpler than it looks.

What to Listen to

The pangram from Friday’s Spelling Bee was allowance. Here is today’s puzzle — or you can play online.

P.S. Battling insomnia? Dubious about supplements? The Times’s Well section wants to answer your questions about sleep. Ask them here.

Today’s episode of “The Daily” is about Russia’s vaccine diplomacy. On the Book Review podcast, Patrick Radden Keefe discusses his new history of the family behind Purdue Pharma.

Claire Moses, Ian Prasad Philbrick, Tom Wright-Piersanti and Sanam Yar contributed to The Morning. You can reach the team at themorning@nytimes.com.

Coronavirus: PM given explanation of how some migrants can’t access government funds

Smothering bum in banana to get one like Kim Kardashian not good, warn docs