Here’s what you need to know.

By Isabella Kwai and Mike Ives

(Want to get this briefing by email? Here’s the sign-up.)

We’re covering rigorous new coronavirus restrictions in Spain, how the pandemic is creating an opening for autocrats, and an overnight van Gogh heist. 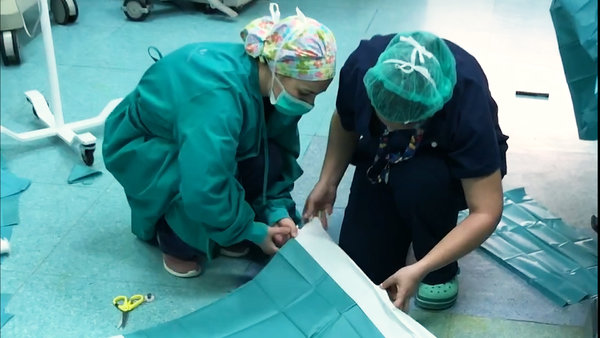 The authorities in Spain on Monday called for a period of nationwide “hibernation” until April 9 to help avert the collapse of hospitals overwhelmed by the coronavirus outbreak. They likened the halt on nonessential economic activity to restrictions previously imposed on the Chinese city of Wuhan, where the coronavirus outbreak originated.

The upward curve of Spain’s new infections appears to be flattening, the country’s foreign minister said on Monday. Yet Spain reported more than 812 new deaths, bringing the national toll to nearly 7,400, and its 85,000-plus confirmed cases outpaced mainland China’s for the first time.

Our video desk has a report on Spain’s health care workers, who are falling ill from Covid-19 at particularly high rates — and in some cases making their own gowns, masks and shields.

Futures markets predicted modest rises on Wall Street and in Europe today, after both markets saw gains on Monday. We have a live briefing.

Austria will require residents to wear face masks when shopping for groceries beginning this week. Experts have questioned prevailing guidance in Western countries that dismisses the need for masks.

Japan issued travel warnings against Britain, China, the United States and other countries this morning, amid a surging coronavirus caseload and calls for Prime Minister Shinzo Abe to declare a state of emergency. Tokyo’s 2020 Summer Olympics are now set to start in July 2021.

France recorded its worst one-day death toll on Monday, surpassing 3,000 deaths in all.

Prime Minister Benjamin Netanyahu of Israel, who had gone into quarantine after possible exposure through an aide, has tested negative. The virus is mushrooming in the country’s ultra-Orthodox communities.

Prince Charles of Britain, the heir to the throne who was quarantined in Scotland for the past seven days, took himself out of isolation.

The Times is providing free access to much of our coronavirus coverage, and our Coronavirus Briefing newsletter — like all of our newsletters — is free. Please consider supporting our journalism with a subscription.

It’s part of a broader pattern: While many agree that extraordinary measures are needed to contain the coronavirus, the pandemic has been a boon for leaders with an autocratic bent. Critics say that some governments are seizing virtually dictatorial authority with few safeguards under the cover of a public health crisis.

Quotable: “We could have a parallel epidemic of authoritarian and repressive measures following close if not on the heels of a health epidemic,” a U.N. human rights expert said.

Russia: When there’s bad news, President Vladimir Putin’s underlings deliver it. The strongman himself has been curiously absent, even as Moscow went into lockdown on Monday.

China: Some experts have raised concerns that the country’s authoritarian leaders may have underreported the extent of its outbreak and death toll, and that a monthlong lockdown in the far western region of Xinjiang may have left many Uighurs hungry and suffering in harsh conditions.

President Trump suggested to the governors of America’s 50 states on Monday that a chronic lack of kits to test people for the coronavirus was no longer a problem. He also told reporters that the U.S. would ship ventilators to France, Italy and Spain “as we outpace what we need.”

Governors see a different reality. They say they still do not have enough kits to test people for the virus, even though testing has picked up after early stumbles blinded the U.S. to the dangers of Covid-19. They also say that their hospitals are facing dire shortages of ventilators.

In Louisiana, for example, Gov. John Bel Edwards has warned that hospitals in and around New Orleans could run out of ventilators as early as this weekend.

Analysis: People close to the Trump administration’s effort to ramp up production of ventilators say that mismanagement delayed the process by several crucial weeks.

Another angle: The Trump administration had all but done away with formal press briefings until recently, when the president himself began holding court on the coronavirus — and making plenty of objectively false claims — on live TV.

If you have 10 minutes, this is worth it

The lights are still on in Times Square, but almost no one is there to see them.

New York City, a place where strangers’ lives intertwine in fantastic and untidy ways, has been forced into solitude by social distancing measures. Above, a cyclist crossed a deserted avenue in Manhattan.

Now its abandoned thoroughfares look like a rented backdrop in need of a cast — and millions of extras.

Climate change: The Trump administration is expected today to announce its final rule to roll back automobile fuel efficiency standards, allowing American cars to emit almost a billion tons more carbon dioxide over their lifetimes than they would have under Obama-era standards.

British royals: Prince Harry and Meghan, who recently moved to Los Angeles from Canada, wound down their popular social media sites as part of their transition to semi-royal status.

Stolen painting: The Dutch police are investigating the theft of an early van Gogh painting from a museum, southeast of Amsterdam, that has been closed because of the coronavirus.

Snapshot: Above, a coconut water vendor, José Luis Miguel Monroy, who is the only wage earner in his family in Mexico City. Latin America’s informal workers are among the most vulnerable in the continent’s coronavirus outbreak.

What we’re reading: This Samantha Kirby essay about adult friendship in The Cut. “It’s deeply improbable that an essay about making new friends is so delightful right now, but that’s just a testament to how wildly brilliant Sam is,” says Jenna Wortham, a culture writer for The Times Magazine. She recommends it if you’re “ready to LOL.”

Cook: Melissa Clark’s easy mujadara, a streamlined version of the Middle Eastern classic, features lentils and rice topped with golden fried onions. This recipe is from our pantry cooking series.

Read: Paul Theroux on how living through a curfew and political upheaval in Uganda in 1966 shaped him as a traveler and a writer.

See: Donald Judd’s puzzle of plywood boxes is “an exercise in vision-sharpening comparative looking,” our critic Roberta Smith writes. It’s at Gagosian Gallery in New York — and you can view it online.

Chasing a dream in Afghanistan

As a U.S.-Taliban peace deal unfolds, bringing an uncertain future for Afghan girls and women, Fatima Faizi, a correspondent based in Kabul, wrote for Times Insider about how her recent visit to a progressive girls’ school incited a flashback to her childhood.

When Ms. Faizi was 6, she set off with her grandmother for the one-hour walk to her new school.

“There were 70 students in a narrow room,” she wrote. “It was shocking. Some students were 15, or even older. I seemed to be the youngest one there.

“At first everyone thought I was slow, because I was so shy that I wasn’t taking part in the class activities. But I was actually ahead of others my age: I started in second grade, not first, because I could already read the alphabet.

“When the Taliban were in power, girls were not allowed to go to school. I was lucky enough to study at home with my mother.”

She missed a semester after she fell sick, and later stayed home to help her father recover from severe burns from an accident at a gas station. Still, she graduated from high school and went on to pursue her dream of becoming a journalist. She joined The Times’s Kabul bureau in 2017.

“Since 2017 I have covered the Afghanistan war — a war started by Americans that has changed my life,” she said. “When there were Taliban in the country, my life was upside down. I wasn’t Fatima Faizi; I was fated to only be someone’s wife, to clean, cook, raise the children and never have a chance to dream.”

“Now the peace process is unfolding,” she said. “An uncertain future waits for me.”

Thank you
Sam Sifton provided the break from the news, and this tribute by Keb’ Mo’ to fellow musician John Prine was our soundtrack. You can reach the team at briefing@nytimes.com.

P.S.
• We’re listening to “The Daily.” Our latest episode is about the challenge that the coronavirus poses to hospitals in the U.S.
• Here’s today’s Mini Crossword puzzle, and a clue: Plant life (five letters). You can find all our puzzles here.
• The team producing our print edition is working from home for the first time in New York Times history — here’s how they do it.

Opinion | Hong Kong Crackdown Is an Early Test for Biden

Opinion | What an Antislavery Politician Missed and Why It Still Matters