A labor union’s effort to organize about 5,800 Amazon workers in Bessemer, Ala., has turned into a national story. The workers are now voting whether to join the union, in an election that runs through March 29.

I asked Noam Scheiber, who covers workplace issues for The Times, to explain what’s going on. Our conversation follows.

David: Why has this one local union election become such a big deal?

Noam: Amazon is the second-largest private employer in the U.S. In the more than 25 years since its founding, the company has successfully resisted unionization at all of its U.S. facilities, which now number in the hundreds. But labor leaders believe that a single high-profile success will reverberate across the country.

There are already signs that they may be right. Some nonunionized Amazon workers on Staten Island walked off the job last year, to protest pandemic working conditions. And the union that’s trying to organize the workers in Alabama — the Retail, Wholesale and Department Store Union — says it has received more than 1,000 inquiries from other Amazon workers since this campaign started.

And I assume union leaders hope that success at Amazon may then lead to success elsewhere, too?

Yes. They feel that if they can begin to unionize the company in the United States, then blue-collar workers have a chance at humane working conditions and a middle-class quality of life. If not, they argue, then the future of work for those without a college degree will be low-paying jobs with backbreaking productivity quotas that are heavy on surveillance. That’s how they describe Amazon’s labor model, with some justification.

Amazon exerts a lot of influence over working conditions for tens of millions of other workers. When Amazon enters an industry, it often forces the competition to adopt similar labor practices — partly on pay, but also squeezing efficiency out of workers. Consider, for example, that shares of Walmart, Target, Kroger and Costco swooned after Amazon announced its acquisition of Whole Foods back in 2017.

Amazon and the union have made competing claims about whether the jobs already come with good wages and benefits. Can you help us understand them?

The company typically pays rank-and-file warehouse workers between $15 and $20 per hour and offers health care and retirement benefits. For a full-time worker, that translates into about $700 a week. Amazon touts its compensation package as “industry-leading,” though most of its workers are likely earning well below the national weekly median of about $1,000 for full-time workers. 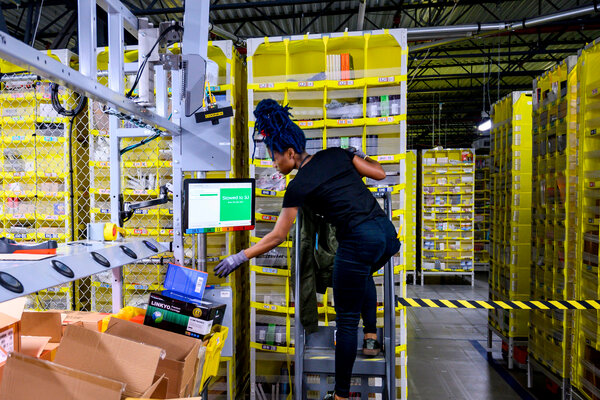 Is there reason to think that Amazon workers could earn more if they formed a union?

Yes, pay for unionized workers tends to be higher than for nonunion workers, even when you control for factors like education and experience. But I suspect Amazon will likely raise wages even if the union loses, because credible threats of unionization tend to drive up wages even at nonunion companies.

The bigger benefit to workers from unionizing may be negotiating over working conditions that they frequently complain about, like the pace of the work and the aggressiveness of production goals.

It’s been fascinating to see Joe Biden offer stronger pro-union words than any president in decades — and then see Marco Rubio, a conservative Republican, also encourage the Bessemer workers to join a union. Is it possible that labor unions are on the verge of growing again?

There’s an element of social contagion here, in which successful activism by some workers can inspire others. We saw that during the teacher walkouts that began in West Virginia in 2018 and quickly spread to Oklahoma, Kentucky and Arizona. The same has recently happened in digital media and among white-collar tech workers.

That said, it’s hard to believe we’ll see a reversal in the decades-long decline in unionization, as opposed to a slowing of the decline, absent a major change in U.S. labor law. The current law gives employers enormous advantages in a union campaign. They can subject workers to a barrage of anti-union rhetoric, through mandatory meetings, emails, signage. Unions have no comparable way of getting their message out. And the law rarely results in more than a slap on the wrist for employers that fire workers for supporting a union.

What would “a major change in U.S. labor law” look like?

Something along the lines of the PRO Act that the House just passed, which would dramatically increase the penalties for retaliating against workers who organize. Or card check, which would allow workers to unionize if a majority sign cards, allowing them to bypass a contentious election like this one.

Another approach would be sectoral bargaining, in which a union could bargain with all the major employers in an industry by getting, say, 10 to 20 percent of the industry’s workers to sign cards. That would diminish the incentive of any one employer to fight a union campaign out of a fear of competitive disadvantage. Germany, France and Norway use sectoral bargaining.

Given Biden’s pro-union history, could some of these proposals actually happen?

As long as the filibuster is in place, it’s hard to imagine any legislation along these lines passing the Senate — though there are some intermediate steps he might be able to take, like allowing individual states to set up a sectoral bargaining system.

More from The Times: David Streitfeld looks at Amazon’s history of keeping out labor unions. Astead Herndon explains why Biden got involved. Michael Corkery and David McCabe explain why Rubio did. And Michael and Karen Weise look at the many other big names who’ve gotten involved.

Donald Trump called the Covid vaccines “great” and “safe” in a Fox News interview. “I would recommend it to a lot of people that don’t want to get it, and a lot of those people voted for me, frankly,” he said.

Some public health officials say three feet is enough social distance in schools. Not everyone agrees.

Some people who have suffered from “long Covid” say their symptoms are disappearing after vaccination, The Washington Post reports.

A gunman killed eight people, seven of them women, in an attack on three massage parlors in the Atlanta area.

Six of the victims were Asian, the authorities said, raising fears that the attacks may have been racially motivated.

The police captured a 21-year-old suspect. Here’s what we know.

U.S. officials expect more migrants at the southern border this year than at any time in the past two decades.

An intelligence report found that Russia tried to influence the 2020 election in Trump’s favor.

Senator Mitch McConnell vowed that Republicans would bring the Senate to a standstill if Democrats changed the filibuster rule. Biden said he supported modifying the rule to require senators to speak on the floor.

Biden also said that Gov. Andrew Cuomo of New York should resign if an investigation confirms the sexual harassment accusations against him.

Eight migrants died in a car crash in Texas near the Mexican border. A similar accident happened two weeks ago in California.

$10 to $14: It should vary by region to preserve jobs, the research institute Third Way suggests.

$15: A nationwide $15 minimum wouldn’t cost many jobs and it would reduce poverty, the economist Arindrajit Dube writes in The Washington Post. “Thirty-two million Americans would get a raise,” the labor organizer Saru Jayaraman says on “The Argument.”

$24: The minimum wage should match the economy’s productivity growth, as it did until 1968, The Intercept’s Jon Schwarz argues.

Cody’s World: The key to a healthy lifestyle? For The Times’s Amanda Hess, it’s a Peloton instructor who looks “like a piece of Disney fan art.”

DealBook: Were the airline buyouts necessary?

For sale: The minutiae of your day

“Have you ever wanted to control my life?” a 15-year-old TikToker with 3.3 million followers asked in a recent online video. He then asked his fans what game he should play with friends — dodgeball or catch — and 78 percent chose dodgeball. Fans have also voted on what he should watch, what video games he should play and what to name his pet hamster.

These interactions are an example of how start-ups are making it easier for digital creators to monetize every aspect of their lives, as Taylor Lorenz, a Times tech reporter, writes. One of those companies is NewNew, where fans pay to vote in polls, like the dodgeball one, to determine a creator’s daily choices. Five votes cost $4.99.

“It doesn’t matter how boring you think you are, there’s someone out there who would find your life interesting to the point that they’re willing to pay,” NewNew’s founder, Courtne Smith, said.

Influencers are joining such platforms for the promise of diversification, Taylor writes, leaving them less beholden to a the ever-changing algorithms and pay structures of a few social media giants.

Christine Smallwood’s debut novel, “The Life of the Mind,” features an English professor coping with the end of her pregnancy. It dazzled The Times’s John Williams.

The pangram from yesterday’s Spelling Bee was hemlock. Here is today’s puzzle — or you can play online.

P.S. Many women marched in New York City’s St. Patrick’s Day parade 103 years ago this week “in the absence of thousands of loyal sons of St. Patrick at the front in Europe,” The Times reported.

Today’s episode of “The Daily” is about the minimum wage. On “The Ezra Klein Show,” Mark Bittman critiques the modern food system.

Claire Moses, Ian Prasad Philbrick, Tom Wright-Piersanti and Sanam Yar contributed to The Morning. You can reach the team at themorning@nytimes.com.

Opinion | Elise Stefanik, Moderate? No, She’s Always Been a Shape-Shifter.