Over the past decade, an idea has become popular with mayors and governors, both Democratic and Republican: A K-12 education is no longer enough.

Students should start school earlier than kindergarten, according to this view, both to help families with child care and to provide children with early learning. And students should stay in school beyond high school, because decent-paying jobs in today’s economy typically require either a college degree or vocational training.

In response, many states and cities have expanded education on at least one end of K-12. Florida, Georgia, Illinois, Iowa, New York, Vermont and West Virginia have something approaching universal pre-K. Arkansas, Indiana, New Jersey and more than a dozen other states have tuition-free community college. These expansions appeal to liberals’ desire to use government for helping people and conservatives’ preference for expanding the economic pie rather than redistributing wealth. 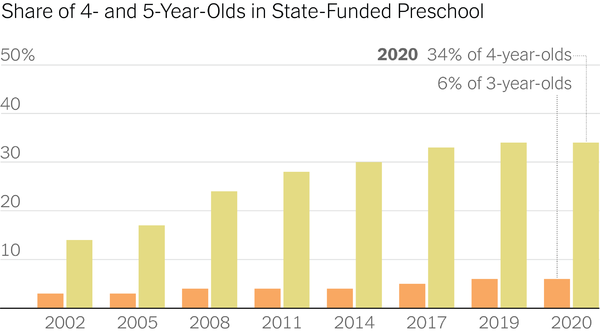 “The income disparity deal is real in our country,” Bill Haslam, a Republican and the former Tennessee governor who pushed for free community college, told Politico, “and the question is, ‘What are we going to do about it?’”

Or as Rahm Emanuel, a Democrat and former mayor of Chicago who expanded pre-K and community-college enrollments, told me: “High school just doesn’t cut it anymore. It was good for the industrial age. For the information age, you’ve got to go to community college.” Emanuel added, “It has bipartisan support.”

Tonight, President Biden will go before Congress to lay out his agenda, and an expansion of federal funding for pre-K and community college will be a central part of it. Despite the recent gains, both pre-K and community college remain far from universal. And Biden’s proposal is an example of how he is trying to define bipartisanship during a time when congressional Republicans are often unwilling to support almost any new federal policy.

I realize that may sound like a sweeping statement about the Republican Party, but I think the facts justify it. Consider the past decade:

When Republicans controlled the White House and Congress in 2017 and 2018, the only major legislation they passed was a tax cut, and the only other big bill that came close was a repeal of Obamacare, without a replacement.

When Donald Trump ran for re-election, the party did not write a campaign platform.

Biden is hoping he has found one exception — infrastructure. A handful of congressional Republicans have proposed a plan for new roads and other infrastructure that is much smaller than Biden’s yet a possible basis for negotiations. Ron Klain, Biden’s chief of staff, told a group of columnists this week that he considered the offer serious and “a step in the right direction.”

On many other issues, though, there is no sign that congressional Republicans are open to compromise with Biden. Their political strategy, as Senator Mitch McConnell famously described in 2010, is to make a Democratic president look partisan and try to win the next election.

That forces Biden to choose between passing bills along party lines and getting little done. He has decided to try to pass bills — and to emphasize the ways that the ideas are bipartisan even if the vote in Congress may not be. Expanded pre-K and community college certainly qualify.

Still, there are problems with this approach. One example: Democrats are not the only ones with constructive ideas about education. Republicans sometimes put more emphasis on school accountability, while Democrats assume — incorrectly — that adequate funding ensures high quality. If the two parties were negotiating over a bill, it might include a mix of both sides’ best ideas.

Instead, congressional Republicans have walked away from substantive legislative talks, in education and several other major policy areas. Biden does not have a magical ability to change that. But it is not a sign of a healthy democracy.

He will also propose paid family leave and an extended child tax credit. The Times’s live coverage is here.

Two hundred people will be in the House chamber, instead of the usual 1,600, and security will be tight.

The C.D.C. says that vaccinated people can be maskless outside, except in crowds.

The E.U. is securing 1.8 billion more Pfizer vaccine doses. Step inside the negotiations.

Republican members of Congress with medical training released a video urging Americans to get vaccinated. Vaccine skepticism is higher among Republican voters than Democrats.

“I’m sitting in my apartment waiting to catch the disease. That’s what it feels like right now in New Delhi,” Jeffrey Gettleman, The Times’s bureau chief there, writes.

Biden signed an executive order raising the minimum wage paid by federal contractors to $15 an hour, which is likely to affect hundreds of thousands of workers.

Biden will nominate Ed Gonzalez, a Texas sheriff and critic of Trump’s deportation policies, to lead Immigration and Customs Enforcement.

Senators of both parties and a Pentagon panel favor overhauling how the military handles sexual assault. The plans would remove military commanders from deciding cases.

The police in Alameda County, Calif., released footage of a 26-year-old man who died after officers pinned him for five minutes.

Iranian military vessels twice harassed American ships in the Persian Gulf this month after a year of relative maritime peace.

Former staffers of Willows Inn, a restaurant on an island north of Seattle, told The Times about faked ingredients, sexual harassment and abuse.

“Falling apart, frayed at the edges, ceasing to function”: More than a year into the pandemic, our homes are getting tired of us, too, The Times’s Pamela Paul writes.

Pride and Prejudice: A Jane Austen museum in England plans to describe her family’s ties to the slave trade. Some people are not pleased.

Lives Lived: Ole Anthony went dumpster diving to find incriminating evidence about televangelists. What he found took down ministries and sent a preacher to jail. He died at 82.

The evolution of Black superheroes

The latest entry in Black History, Continued — a Times project about significant moments and figures in Black culture — is about superheroes. Why? “Superheroes gave us an opportunity to look at this thing that will keep coming back through the year, which is, what is a Black hero and what do heroes mean in Black history?” Veronica Chambers, who spearheaded the project, said.

A new generation of writers is placing Black heroes at the center of big-budget films and TV shows, including “Black Panther” and “The Falcon and the Winter Soldier.” Black creators are also reinterpreting well-worn superhero narratives. The writer Ta-Nehisi Coates is working on a Superman screenplay that many believe will include a Black version of the character.

Though the story lines are fantastical, the works often contain parallels to real-life experiences: In a recent adaptation of the DC Comics character Nubia, for instance, the police profile and detain her as she tries to save the day. There’s also a graphic novel series — “Harriet Tubman: Demon Slayer” — that reimagines the abolitionist as a katana-wielding warrior.

What to look for in spring wildflower season.

In “Jackpot,” Michael Mechanic details how the ultra-rich live, arguing that inordinate wealth “harms us all” — including the ultra-rich. Read The Times’s review.

The pangram from yesterday’s Spelling Bee was optimal. Here is today’s puzzle — or you can play online.

P.S. A hidden haiku from our colleague Claire Cain Miller’s conversations with girls about how the Trump presidency shaped their politics: “Maybe I’ll try to / catch up with them again in / 2024.”

Today’s episode of “The Daily” is about India. On “The Argument,” a debate about police reform. And on “Popcast,” why the sing-rap generation is thriving.

Lalena Fisher, Claire Moses, Ian Prasad Philbrick, Tom Wright-Piersanti and Sanam Yar contributed to The Morning. You can reach the team at themorning@nytimes.com.

Opinion | A Priest Who Left the Church for Love